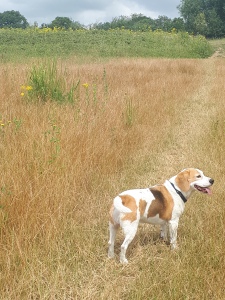 Well, Readers, all I can say is that it’s a jolly good job I had my walk this morning before all the drama started.  What an afternoon!  I believe half the country have been glued to their television sets for many hours and I imagine many of my fellow dogs have been completely neglected.  Dearie me.  It seems there has been an ‘astonishing’ afternoon of sport in our beloved country and so all other activities were put on the back burner for several hours.  This seems unfair on any of us who couldn’t give a monkey’s about the Cricket World Cup or Wimbledon Men’s Final.  And yes, some of us really couldn’t.

Young Lad will, of course, be absolutely full of it when he finally returns home tonight as He and Young Lad have been at somewhere called Boreds, or is it Lords, watching the aforementioned Cricket World Cup Final.  This has gone on a ridiculously long time today as it ended in a tie-break and then they had to do something called a Super Over, whatever that is, to decide the outcome.  It’s all rather silly if you ask me, and I slept throughout.  So did Gingercat.  Anyway there was a lot of tense oohing and squealing as  not only was the cricket being watched, but also the tennis Men’s final which was equally down to the wire, and the air was punctuated by shouts of “Go on Roger!” every so often.  I was quite impressed by the manual dexterity shown in flicking between BBC1 and Channel 4 every minute.

In all honesty though I was quite glad when it was all over and normal things like the ironing were done instead.

On my walk today, as you will see from the picture, we went up through Top Field where the grass is still far too long and there are now hundred of species of wild flowers growing.   Really somebody from the council should have been up there weeks ago to cut it so that I can walk more comfortably without it poking in my eyes, but no.  And now that there are all these purple and pink wild flowers it has probably had some sort of nature preservation order slapped on it, so I will forever be hidden beneath the flora.  Though it has to be said I found some dry fox poo to roll in, and She couldn’t see me, so that was quite a result.

It was a warm, slightly humid morning and I was panting a great deal by the time I came back down to the river.  In I went, for a lovely cooling dip as did several other dogs who were being walked in the middle of a hot morning,   Then my day improved hugely as who did I see further up the hill but dear, dear Pippa!  Oh it was wonderful.  Even though I was completely exhausted, I dug deep and found the energy to bound around with her and run in that silly way with my tail between my legs when she chases me.  It was great!  Plus of course, I had a chat with Pippa’s Pack Leader whom I love dearly, and she had her Mum with her, and do you know what her Mum said?  “Russell looks slimmer.”  I know!  And that’s with all the bin-raiding I’ve done lately.  On the way back home I stopped to chew up and eat a stick, so She got cross and a little impatient with me, and put me back on the lead.  What a cracking morning’s walk.

Last Friday, my Pack Leader had promised me she wasn’t working and that we would have a day at home together, but oh no – the phone went at silly o’clock asking her to work.  Actually this worked out well for me, as a panic-stricken text message was sent next door to Lovelyneighbourontheright, to see if they could let me out mid-morning.  Now Lovelyneihgbourontheright is very kind and didn’t want to see me home alone, unloved, all day so took me out for a long walk with their Cockapoo and let me spend the rest of the day round at their house!  Oh I loved it – I tried out most of their soft furnishings and spent a large part of the day sprawled out on their new garden furniture.  The Cockapoo is not allowed on the garden furniture but I was.  I think this is because I was the guest, and it was a reasonable decision.

So it’s been really peaceful here today with Young Lad and He at Boreds.  Lad has been, er, I’m not really sure what Lad has been doing but most of it has involved sitting on the sofa.  Then She suggested a driving lesson this afternoon and took Lad over to an industrial estate, where Lad practised first and second gear, and reversing.  How exciting.  Then they celebrated Lad not having crashed into anything by going to Costalotta for a drink.  Whilst there Lad engaged in lots of deep, philosophical discussion so before long She sighed and said it was time to go home. Lad is not appreciated  much of the time.

It’s going to be a busy old week, I’ve been told, so my daycare is being sorted out.  Thank the Lord for all my friends and neighbours, that’s all I can say.

Well Readers, I hope you enjoyed your tense afternoon of British Sport At It’s Best and that you have now taken the time to pay your animals and children some attention.  Such as feeding them.