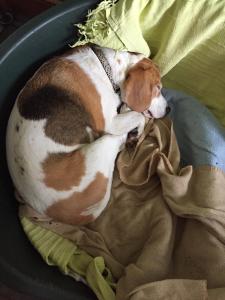 This morning, Readers, I came up with an incredibly clever idea.  Young Lad eats his toast whilst sitting on the sofa in the mornings ( I know, slapdash isn’t it) and then has to answer the door to Ebony’s Pack Leader when she comes to collect me for the day.  So today I tried something new – when Ebony’s Pack Leader arrived at the door I barked and barked, making it very clear that she was there, so Young Lad had to get up from the sofa and come out to answer the door.  What did I do, Readers, but slip between Young Lad’s legs and sprint back to the lounge where I grabbed his plateful of toast and ate it in two gulps!  It was sheer genius.

What this meant was that Young Lad was very cross and didn’t have any breakfast, and Ebony’s Pack Leader had to wait outside for ages whilst I finished the toast and wandered back  out to the front door.

The toast was thick granary with butter, and it was so worth it.  I love a good piece of toast.  I don’t feel guilty that Young Lad went off to school without breakfast as frankly he should have eaten it more quickly instead of faffing around on his phone.  It was his own fault.

And guess what I’ve found in Lad’s bedroom tonight?  Another piece of granary toast that Lad didn’t have time to eat this morning!  Talk about result.   It was cold, unfortunately, as it has been sitting in Lad’s pigsty of a bedroom all day, but toast is toast and a third slice was most welcome.  I then had a look under the bed to check if there was any old packed lunch there and was delighted to find a Rocky chocolate biscuit.  It was squashed and rather crumbly – probably beyond human consumption in all honesty- but I found a home for it.

I also grabbed Gingercat’s food bowl and ran off with it at teatime.

So not a bad day, all in all.  I had a splendid time at dear, dear Ebony’s house and slept in her very comfortable bed for half the day. Ebony had to sleep elsewhere. She’s used to it.

I was rather late going home tonight, as Young Lad took far too long walking home from school with his friends.  I suspect there was some dilly-dallying and messing around plus popping into the Co-op for an unhealthy snack.  He could have brought me one.  Anyway, Young Lad seemed to have forgotten that he was meant to collect me, and when She texted him to say hurry up and collect the dog, Young Lad’s answer was “Chill.”  I’m not sure what he meant.

Readers, it was Food Technology day for Young Lad today!!  Yes, having got the wrong day last week and taken in his ingredients a week early, today was finally the day for macaroni cheese.   Oh I just couldn’t wait.  We were not disappointed, Friends, and although hanging around  upside down in Young Lad’s schoolbag for several hours hadn’t done a lot to the overall appearance of it, the flavour was superb.  I caught a little of it as it dropped off the side of the dish and splatted on the kitchen floor. Well done Young Lad.

Lad really didn’t want to get out of bed this morning and I have to say I know how he felt.  I was in a lovely deep sleep – don’t forget I’ve been dragged for a lot of very long walks this week – and was exceptionally tired. Lad and I could happily have slept on for several more hours, and it was a brutal awakening when the ruddy alarm clock went off.  He and I were both in filthy moods for quite a while after this.  The difference is that poor Lad then had to head off to face a ten-hour day of bus journeys and school whereas I slept in Ebony’s nice bed.

I had some lovely Happy Anniversary wishes the other night, Friends.  Thank you so much for your kind words, and who would have thought my blog would keep going for a whole year! It’s nice to be appreciated and you never know, one day it might rub off on my own family.

Maybe they are feeling guilty that I’m being neglected, as Lad uncharacteristically threw a toy around the lounge for me tonight.  It was a pink plastic bone that squeaks.  I ignored it.

You should see the state of our house, Readers.  This is due to all the Extra Working Hours and He, Lad and Young Lad failing to notice all the crap everywhere.  In front of me right now I can see my large bone in the middle of the carpet for everyone to stub their toes on, a pair of flip-flops, the triangle thing that holds the balls on the mini snooker table and a toy Japanese bus.  Lord only knows where that came from.  Everyone here is very skilled at walking around items like these and not picking them up. I think they practice.  Lad’s bedroom deserves some sort of award for its artistic bent, as it’s definitely in the Tracey Emin genre.  I love it when Lad’s bedroom is in this state as you never know what you might find underneath all the clothes and towels.  When She finally gives in and tidies up with LOADS of bldymoaning, it becomes far more boring, as there is no chance of any snacks.   I feel this is more important than the level of hygiene but nobody listens to me.

Tomorrow night is Friday evening and therefore Slovenly Pizza night.  However, due to it also being something called Children In Need, there will only be myself, He, Lad and Young Lad on the sofa for the evening as She will be going out with Loadsakids.  This has now become an annual event, as they choose to sit in a dark cinema with a cup of tea discussing Life In General rather than thinking about Children In Need.  She and Loadsakids feel they have a lot of children in need between them and that the whole bldy year is spent on children in need, so it doesn’t require a special bldy day.

Readers I think they have missed the point somewhere along the way.

Anyway, I will have a pleasant evening scrounging pizza crusts and leaving my bone in the middle of the floor.