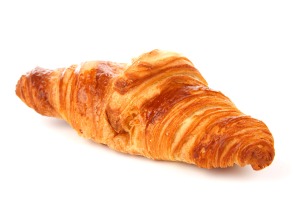 Readers, I  had a marvellous time this morning.  Lad was just about to have his breakfast ( mid-morning)  and he rather carelessly took his eye off the plate to study something important on his phone.  Now, in a clear example of over-parenting, She had heated up a freshly-baked croissant for Lad – it was steaming, just perfect.  The smell!  I don’t know if you’re aware of just how good a fresh, warmed croissant smells.  Oh it was divine, and I knew it would be exactly the right level of crisp flakiness on the outside, and soft melting clouds of dough on the inside. So while Lad looked at the important thing on his phone I jumped up and grabbed the whole croissant off his plate, running as fast as my legs would carry me to the garden with it.

Lad was very annoyed and they all shouted at me.  But there you go.

It was so worth all the unpleasant names I was called,

At lunchtime (which was only an hour  later in Lad’s case) I ran off with a tin that had contained spaghetti hoops.  There were still a few in the bottom so I cleaned it out ready for the recycling bags.  I like to do my bit.  In all honesty I preferred the croissant though.

Yesterday wasn’t quite as good as today.  He took me for a long walk in the morning, which wasn’t a problem in itself,  but while we were out the heavens opened and a very heavy, prolonged April shower hit us.  He and I were completely drenched, and as we were in Far Field when it started pouring, it was a long walk home in terrible conditions.  I was wringing wet, Friends, wringing wet and had to  be towelled down rather roughly. This was unpleasant and I was more than happy to spend the afternoon sleeping in my chair.  But no.  Having cooked a roast dinner at the rather strange time of 5pm, She decided She needed to get out of the bldykitchen and get some bldyfreshair and so my collar and lead were put on me again!  I was incensed!   Mainly because Lad was at this precise moment loading the dishwasher with all the roast plates and bowls, and there was LOADS of gravy meaty stuff for me to pre-rinse!  Did I want to go out for a walk at this moment?  NO OF COURSE I DIDN’T.  But some people are so selfish that I was dragged out of the dishwasher, along the hall and out of the front door.

I got my own back.  I refused to move more than one step at a time, and frequently stopped altogether.  As you can see, I made our walk as difficult and unpleasant as I possibly could. 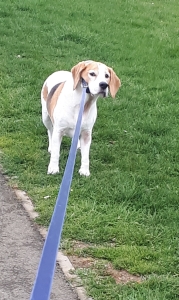 After twenty minutes She gave up and took me home.  Much to my annoyance this was much too late and the dishwasher had been switched on.

I took my revenge by snoring and breaking wind all through Line Of Duty last night.

Today there has been a sudden burst of activity in the house and garden.  The net curtains have been taken down and washed (they were black, Readers, black I tell you), paperwork and bills have been sorted out and paid, and the garden has had some basic tending to.  This was held up while a bad-tempered trip to Q&B was made, as the lawn mower had packed up and despite a noble attempt by She to turn it upside down and undo the blade to investigate, it was clearly well beyond her levels of technical ability to mend it.  So another ruddy £75 had to be shelled out to purchase a new one.

Anyway once home and cheered up by a cup of tea, She cut the grass while Young Lad was employed in weeding tubs and removing last year’s tomato twigs and manky carrots.  Young Lad found this exhausting and after ten minutes told us that his back was aching and could he sit down to do it?  Poor Young Lad.  I sat in the garden and watched as Young Lad spent an hour and a half weeding and tidying up – there was an awful lot of sweeping up to do and I have to say he did a very good job.  Well done, Young Lad.  He then took his payment very happily and spent the rest of the afternoon on the Xbox.

Lad was also supposed to be helping out in the garden when he came back from the gym, but Lad got a better offer from his friends in a town far away so that was that.  After some screeching it was decided he would not be leaving home to catch the train until he tidied his bedroom up, so it cannot be said that Lad hasn’t done his bit.  I do feel someone should tell She that this is the Easter HOLIDAY, a word which implies carefree fun and relaxation, rather than a schedule of hard labour.

I had a lovely walk today – it really was a cracking day – and we went all round Top Field and Far Field.  There was a mother and her toddler down by the river, and you know that any sort of pushchair means Emergency Snacks in that bit on the bottom, so I rushed over and checked it out.  I’m always a little disappointed when they turn out to be Organic Crisps or Sensible Breadsticks, but obviously I’ll take anything if I have thee chance.  Sadly there were no snacks on this pushchair but it’s important to check.  I didn’t see many of my friends but then I was a little late going out today.

It’s really rather nice, not being disturbed by the ruddy alarm clock each morning at the moment and I had a lovely lie-in on Young Lad’s bed this morning.  I intend to do the same tomorrow and the next day and the next day….