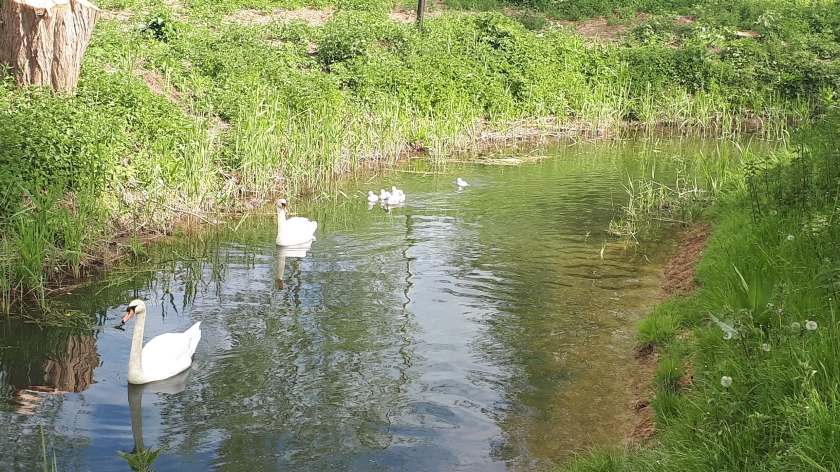 Readers, in these strange times of Lockdown we have all had the chance to appreciate nature so much more than we did.  We have time to hear the cuckoo in the woods, the pheasant’s shriek in the fields and the geese honking as they fly overhead.  This week it has been magical to see- every day on my walk – the Bastard Swans gliding down the river with seven, yes SEVEN, baby cygnets in tow.  Now I’m not a big fan of the Bastard Swans, as Regular Readers will know, and over the years I have been hissed at, threatened and chased more than seems fair.  I really, really don’t like them.  But even I can see a certain beauty in their little family outings up and down the river.  Nature at its finest.

Talking of which, I enjoyed some Nature at Its Finest up in the field the other day.  I found half a rabbit carcass in the bushes and dragged it out – oh, I was SO pleased with myself!  I ran around with its head hanging out one side of my mouth and the rest of it hanging out the other side, and I made lots of silly whimpering noises of sheer pleasure.  I dragged this thing for the remaining two miles of our walk, occasionally stopping to crunch through spine or skull, and I was incredibly proud of myself.  She said, “for goodness sake, it’s not as though you actually caught it Russell, it was already dead,” but this was just jealousy.  I had a marvellous time, Readers, and it took me a good long time to finish it off.

I know you might be worried about bacteria, or maggots or disease from a rabbit carcass but rest assured, I was fine.  A touch of smelly wind in the evening, to be fair, but otherwise fine.

Week 8 of Lockdown and all is still well here.  Young Lad is beginning to get the idea about Home Learning – it hasn’t taken long – and ploughs through a few tasks a day. I fear he is rather behind with Art, Music and Design Technology but Young Lad says he isn’t doing these for GCSE so what’s the point?  It makes far more sense to concentrate on Maths, English, History and French so that there is time to watch Top Gear and Bargain Hunt, as these support the Geography and History curriculums.  Young Lad has also decided “A Place In The Sun” is another educational programme as it is so informative about the Costa Del Sol.  I think Young Lad has been very underestimated.

In addition to the Home Learning, Young Lad is given a list of helpful household tasks to carry out while She is at work.  On Friday this included ‘hang the washing out’, ’empty the dishwasher’ and ’empty the airing cupboard.’   How on earth is Young Lad supposed to focus on his studies when he’s under such pressure?  No wonder he needs to keep sitting down on the sofa for a rest.  I usually join him.

Lad is finding the lack of social life rather tedious now, and longs to join his friends in a town Far, Far Away.  Lad dipped a tentative toe in the water in this respect yesterday and met a friend in a park to ‘exercise’ at a very safe distance from each other.  I’m not sure what sort of exercise they did – Lad was vague about the details.  But I’m jolly glad that he got out in the fresh air, and the rules about removing his trainers in the front porch before entering the house, anti-backing his hands and getting straight in the shower BEFORE finding something to eat seemed a little draconian, but there you are.

Today, Readers, Lad and She went to London as Lad was due for his yearly MRI scan at a hospital there.  Now, it was deemed risky to go by train and underground, so the decision was made that the two of them in a car (wiped down with anti-bacterial wipes) would be much safer.  Poor Lad had to get up much earlier than he wanted to, in order to drive to central London, largely as She has no clue about directions up there and allowed lots of time.  All went well until Google Maps was relied on to navigate them from the end of the M11 – alas Google Maps has a strange sense of humour, and as they were driving across Tower Bridge there were shrieks of “Lad, we’re going SOUTH of the river!  We need to be NORTH of the river!” and much wailing/banging of fists on the steering wheel.  But  not to worry, Friends, as Google Maps simply re-routed them through Lambeth and various other irrelevant places until they crossed another bridge and were, indeed, NORTH of the river once more.  The language in the car was quite inappropriate and indicative of poor parenting.

Lad was heartily dismayed to find that Lockdown extends to central London, and there was NOWHERE to get anything to eat.  KFC, Greggs, MacDonalds, Starbucks and Costa were ALL obeying the law and staying closed. Lad was STARVING, Readers.  Poor Lad.

I’m getting a little fed up with the relentless walks that I’m made to go on.  These seem to get earlier and earlier – and for the last two days I have had to be physically pulled out of my armchair in the mornings, as I just don’t want to go.  I can’t see what the obsession is with trying to spot a muntjac or hare, which we will only do if we go EARLY – who cares?  A lie in and a little relaxation is all I ask, Friends – it’s not unreasonable, is it?  Life is very tiring. It has been nice, however, to bump into my dear friend Ebony on occasion – Ebony was on the lead so she couldn’t knock me off my feet like dear Pippa did the other week.  I have very nearly forgotten this incident and will soon be back to bounding around with her once more.

Well, I imagine that due to the stress of Google Maps and being south of the river today, She’s friend Gordon will be popping round tonight.  I did notice a lemon in the fruit bowl, so this has obviously been well planned.  I will spend the evening asleep in my armchair while Young Lad and She watch lots of things on Netflix and Lad shouts on the Xbox in the other room.  Happy days, Friends, happy days.

I do hope you are all staying safe and well.