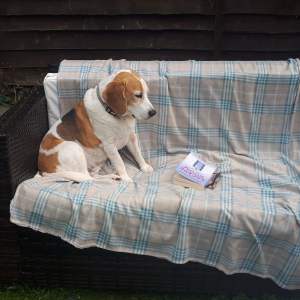 I am SEETHING, Friends, SEETHING.  I am a much-maligned dog tonight, and no amount of apologising will make up for it.

This morning I went out for my comfort break at 7am and instead of rushing back up to bed like I normally do after breakfast, I hung around downstairs. She was going into work a little later today, so She went back up and expected me to follow. But I didn’t.  After a while it dawned on someone that I was still downstairs and I could be heard rustling around with something.  I had been rustling around with something for ages, actually.  Eventually She came storming down the stairs to find me under the dining room table with a multi-pack of Walkers salt and vinegar crisps.  I was given NO chance to explain myself – oh no, Readers, the assumption was made that I had eaten all six packets.  There were, indeed, six ripped- up packets all over the floor but even so, one shoudn’t jump to conclusions!

I was shouted at and dragged away.  All the crisp packets were cleared away and I was ACCUSED of eating all six packets.  There was a fleeting moment of concern as to whether I needed to see the Evil Vet because of all the salt I’d eaten, but this was dismissed quickly and I was taken for a very, very long walk to burn it off.  In addition I was virtually forced into the river to drink.  People at the river who stopped to chat were told that I had eaten six bags of salt and vinegar crisps and there were gasps of horror.  Back home I was made to stand by my water bowl and told to drink.

She was very cross that Lad had clearly put the multi-pack of crisps somewhere I could reach them, while he was up late on the Xbox last night.  A mental note was made to tell Lad off, and give him a piece of her mind regarding his irresponsible behaviour.

When Lad was spoken to, Readers, it transpired that HE ate all six bags of crisps and all I’d found was the empty packets.  Quite why Lad ate all the bags of crisps is anyone’s guess, but was he shouted at?  Dragged out for a 4 mile walk through the woods and forced to drink lots of water?  No he was not.  Did the thought of going to the Evil Doctor fleetingly cross She’s mind?  No.  Double standards, Friends, double standards.

So, to be clear, I did not eat six bags of crisps.  You know, and I know, that I would have done so quite happily, but the fact is the bags were empty.  I am still waiting for an apology.

That said, on my walk at the weekend I DID manage to find a small Mr Kipling blackcurrant and apple pie!  In its foil!  I have no idea what that was doing on the grass but I couldn’t believe my luck and downed it in one.  There was a sticky piece of foil hanging off my lip for a while but eventually I ate that too.

In today’s photo, Friends, you can see me about to curl up on the new garden sofa with a good book.  One of my eagle-eyed friends on my Instagram page noticed that the book is called “Escape Room.”  We all know how I love a good escape.

Lockdown week four has passed by and we’re now into week five.  It’s exhausting.  I’ve been taken out for ridiculously long walks at ridiculous hours of the day – determined to see a muntjac deer, or at least a rabbit, She decided we should go out at 7.15am the other morning.  Up we went above the river, into Top Field and then up through the Bluebell Woods and beyond.  We walked for an hour and a half, and didn’t see so much as an earwig.  Give me strength.  The Bluebell woods are very pretty, it has to be said, but even so I would much rather be in bed at that time of the morning.

Lad and Young Lad are coping remarkably well with four weeks of lockdown, and a new net was bought for the goal in the garden to encourage them to play outside. She was sitting in the garden sunshine when this decision was made (rather rashly) and couldn’t be bothered to go and find a tape measure to check what size the goal is.  Lad was told to stand by the goal and a rough guess was made, as to how many feet tall and wide it is.

The guess was wrong.

A couple of days later, someone bothered to find a tape measure and the correct size was ordered while the wrong one was sent back.  Lad and Young Lad were very frustrated by this ineptitude.

Why do they need a new goal net? I hear you ask.  I chewed the old one into large holes.  That’s why.

Young Lad has been ploughing through his heavy workload of Home Learning.  Today he has researched  famous jewellery designers, read ten pages of Lord of The Flies, studied Aboriginal art and designed a bottle in the style of, and completed a Maths task on algebraic formulae.  He has failed, however, to re-write the lyrics of Bohemian Rhapsody based on his favourite hobby as She was losing the will to live and couldn’t see how this is going to help Young Lad progress in life.

Lad has had some nice lie-ins and then worked hard in dear Ebony’s garden.  He still hasn’t taken me with him.  I’m beginning to think Lad can turn  his hand to anything, Readers, as yesterday in the sunshine he was instructed to cut Young Lad’s hair with the new clippers.  Lad made a very good job of this, Friends, achieving a special effect called a ‘fade’ and only one small bald patch.  Well done, Lad.  Then Lad came near me with the clippers and I growled.

Many of you parents, during this difficult time, are encouraging your offpsring to learn new things such as how to cook.  Last week, Lad was taught how to make proper spaghetti bolognese (quite a fuss was made during chopping the onions as Lad’s eyes kept watering), and Young Lad was taught to make upside down pineapple pudding.  Readers, both were a TRIUMPH.  I really do feel – correct me if I’m wrong – that learning how to cut hair and make nutritious crowd-pleasing meals is actually far more use than A Level Chemistry or re-writing Bohemian Rhapsody.    Perhaps it’s time to reflect on our education system, Friends.

And on that thoughtful note – plus the assurance that many neighbours have been given home-baked goods yet again, don’t worry that obsession is still alive and well – it’s time for me to have a nap.  It’s hard to sleep with the smell of disinfectant and bleach in this house – is yours like it, too? – but I will do my best.

Bye for now, and keep well.