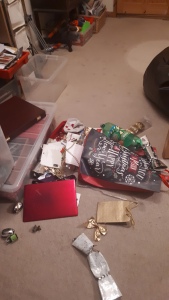 I think I may have mentioned, Readers, that I helped with the Christmas decorations last weekend by pulling them out of the boxes and dragging them round the floor.  My particular favourite was the glittery ribbon that was all over the carpet – the glitter fell off quite pleasingly –  and the Christmas Crackers that I ripped into small pieces.

Well it’s been a funny old week. The hideous Christmas tree from Pidl has been quite the cause celebre  round here, and photos of it have been shared and ridiculed all over town.  She became quite defensive of it and when random strangers called it “appalling”, a decision was made.  There was to be no giving up with the Pidl tree, and so it has been brought into the hall, had some of the lengthier/more wieldy branches pruned and is now squashed into a dark corner with some coloured  lights on it. (The tree has been tied to the radiator pipe with string to stop it committing suicide again.)  In the pitch dark it actually looks passable, especially if you’ve been at the Christmas gin.

Being ten days before Christmas, there has been a lot of Frantic Baking going on.  Last week saw the annual shortbread-making festival and the kitchen was in a dreadful state with crumbs and icing sugar everywhere. It was disgraceful and I had to clear it up.  The annual shortbread-making always starts off in a nice mood, with Christmas music in the background, but the atmosphere quickly changes to one of slight and then intense irritation with mild swearing.  Then there is the clearing up.  Most of the swearing occurs when transferring the shortbread Christmas trees from the baking tray to the cooling rack – as someone has the patience of a gnat and doesn’t wait for it to cool down properly, the shortbread trees often break in half and the tree effect is ruined.  I don’t mind whether my shortbread is tree-shaped or not, and happily clear up any bits that fall on the floor.

Tonight it has been the turn of a large batch of chocolate brownies, which have made marginally less mess due to the lack of rolling out.

My hip is much better, Friends, you’ll be glad to know and I managed a full week of daycare with dear Pippa and Ebony.  I even managed to keep up with them on our long walks and didn’t limp at all.  I’ve been told there is No Money for Vet Bills until the Next Century, so that means I have to stay off the mince pies this year and avoid injury at all cost.  We’ll see.

Down at the river at the weekend, I was shocked by the amount of flooding.  The river has burst its banks in a couple of places, and the fields are in an awful state.  It has rained and rained for ages here and the ground can’t absorb any more.  This was the very dull conversation being conducted by all the Pack Leaders down there, while the dogs all wandered through the river water looking for dead rats.

Of course, this meant that all the local football pitches are water logged, so Young Lad’s football match was called off yet again and She swapped a thumbs-up emoji with Loadsakids.  Then they went for coffee at Costalotta to celebrate.  Costalotta have put up the price of a small Americano (the cheapest drink in the place other than tap water) to £2.20, which is less irksome than the previous £2.10 which necessitated endless scratching around trying to find a 10p coin, but still bldyexpensive.

I went to visit Grandma at the weekend as there was a big family lunch. He,  Lad and Young Lad came with me and we had a splendid time – as you know, Grandma is an excellent cook and made roast beef for dinner with all the trimmings.  It smelled divine and I did my best to sit right in the way in the kitchen so that any falling pieces of beef fell into my mouth.  We went for walks on the seafront, and other than that I stretched out on Grandma’s sofa and had a lovely sleep.  There wasn’t much room for anyone else but that didn’t bother me.  Young Lad didn’t want to go for walks with me as he was tired and had to be encouraged.  Or FORCED as Young Lad called it.  Young Lad wanted to sleep on the sofa just like me.   Too much is expected of us.

Lad met his friends in a town far away and they went to a nightclub.  If you get there before 11pm, it is free to go IN the nightclub and you just pay extortionate prices for the drinks, but what Lad and his friends had failed to grasp was that this is quite a popular policy and so everyone tries to get in before 11pm.  Hence if you rock up at 10.50pm you stand no chance whatsoever and have to queue in the torrential rain for 45 minutes, then pay an entry fee.  I know, Readers, Lad is having to learn a lot of harsh lessons about life these days.  Poor Lad was completely drenched and had to remain in soaking wet clothes until he got home at lunchtime the next day.  Lad thinks he may have pneumonia.

Lad has been given no sympathy whatsoever.

Whilst everyone was out at the weekend, She used the opportunity to do a Lot of Tidying Up.  The ground floor of the house has been unspeakably messy for quite a while, with Lad’s revision notes (yes still) , school bags, bills and paperwork all over the bldyplace.  Everywhere has been given a good tidy up and clean, and there is now one enormous pile of crap in the study for sorting out, instead of several hundred piles on every surface imaginable.  This was a Very Satisfying Weekend and She rewarded herself with a pastel de nata in Costalotta which, incidentally, is about the cheapest thing you can eat to go with the cheapest coffee you can buy.  Give me strength.

Golly I’m tired, Readers – with all this coming and going to Grandma’s, and the walks with my newly-recovered hip.  Time for me to get my head down.