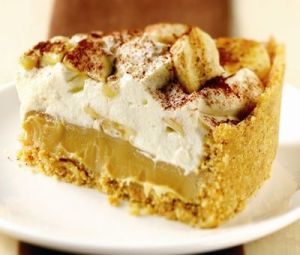 Readers, is there anything in the world quite as delicious as a Banoffee Pie?  The buttery biscuit base, the thick gloopy toffee, the cream, bananas and coffee?

Well I wouldn’t know. Sadly I’ve never had Banoffee Pie.  However my dear friend Ebony has eaten quite a lot of it, on a day that I shall call Self-Service Sunday.  It all started over the Bank Holiday weekend – now I don’t know whether it was due to the unusually good Bank Holiday weather or some sort of misalignment in the stars, but Self-Service Sunday was something else. In common with thousands of other families, Ebony’s family had a big barbecue lunch in the garden with their nearest and dearest.  What a lovely occasion.  (My family did nothing so exciting).

As the occasion came to an end, and Ebony’s Pack Leader went to wave off the relatives, Ebony noticed that a Huge Error of Judgement had been made.  Within her reach was not only the remains of the Banoffee Pie, but also several pieces of chicken and some sausages.  Dear, dear Ebony grabbed the lot and ate it all in seconds – I have taught her well, and I was immensely proud of my friend. Just imagine the flavours in that snack!  Barbecued sausages, chicken and banoffee pie all in one course.  How I wish I had been there with her.

On the same Self-Service Sunday, only a few streets away, my dear friend Pippa was sitting nicely as Pippa always does.  Pippa is not naughty like Ebony and I.  In fact Pippa was sitting nicely while her Pack Leader Male ate a lovely jam doughnut.  Oh how the sugar was crusty, the dough golden and soft, and the jam oozing. Pippa could sit nicely no longer and reached across to take it from her Pack Leader Male’s hands.  This is very out of character for Pippa and again, I was so proud of her.

There were many happy families and dogs on Self-Service Sunday.

It has been very hot over the last few days.  I have found it very difficult to sleep at night and  have needed to spread right across the bed.  She has found this irritating and several times I have been pushed roughly in the small hours of the morning.  It’s rude.

We had LovelyneighbourontheRight’s Cockapoo round here the other day. It is no less bouncy with age, and does a lot of jumping and chasing. After I had a few words with him, the little imp quietened down and we had a nice time wandering round my garden ignoring each other.   Sometimes you just have to make it clear what the expectations are.

It’s very peaceful here tonight.  Lad is at the gym – he had a day off work today, thank goodness, as poor Lad and those long shifts – really, it’s too much.  Young Lad and He are still on their little holiday; it might have been nice if they’d taken me on holiday but there you are.  To be fair I’ve done an awful lot of travelling around and visiting over the last few weeks so it’s nice to stay at home. So there is just Gingercat lying on the windowsill, She faffing around on the laptop and the sound of stillness from the garden.  I love a quiet summer’s evening.  Oh dear.  The silence has been shattered by the television being switched on as the new series of The Great British Bake-Off is about to start.  More lovely puddings, desserts and cakes that I will never taste.  I would happily judge the technical challenge for them, but of course nobody asks me.

Due to the hot weather my walks have been early morning and then again in the evening recently.  Each evening I spot Sausage Sue in the distance and my ears prick up – I run up to her and sit nicely, as I know Sausage Sue always has sausages in her treat bag.  On Sunday night I was rewarded with a sausage. On Monday night Sausage Sue said I could just have a pat on the head. This was nice of her but rather pointless.  Tonight I was on the lead when I saw Sausage Sue in the distance and was pulled back sharply with “STOP BEGGING!” shouted at me.

There were so many people at the river tonight, having picnics.  I had to be kept on the lead for much of the time as I am unreliable when there are picnics around and have been known to run through them grabbing sandwiches and cherry tomatoes as I go.  However, as it was so hot I was allowed off the lead to go for a paddle in the river – to my utter delight someone had dropped their foil-wrapped sandwiches on the river bank so I snatched them and ran off.  I stood in the river to eat them and dropped the foil into the water – this is terrible littering and I do feel bad but there you are.

Lad has been made to cut the grass today which I feel is unkind in these temperatures. He has also done some schoolwork –  not much admittedly – and been told to tidy up the bathroom when he’s used it.  For goodness sake!  This is Lad’s day off!  Expectations are much too high if you ask me.

Well it’s time to lie upside down in my armchair and wave my paws around in an attempt to stay cool.