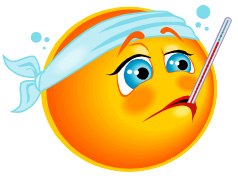 Something marvellous happened this week, Readers.  On Wednesday She had to take a day off work due to hanging over the toilet most of Tuesday night.  This was a first for me, as  never in all the years that I’ve lived here has this happened before.  It was brilliant!  Once the ruddy alarm clock had gone off at 6am, and Young Lad and Lad’s packed lunches and various medications had been sorted out, Gingercat and I were joined back in bed by She!!  Yes!  Readers, I stayed in bed ALL MORNING and it was simply glorious.  I slept and slept, and snored and snored – oh what a treat.

And even after the three of us did make it downstairs, it was only as far as a comfort break in the garden and then straight to the sofa with a big blanket.  I love sick days!

It was TOTALLY unnecessary to drag me round the Rec that afternoon – I said over and over again, look you’re not well, stay on the sofa.  But oh no, the silly guilt thing about the dog must have a walk blah blah blah.  I couldn’t have cared less and was perfectly content to sleep all day uninterrupted.  I mean how often do I get the chance?  It really was the most peaceful, relaxing day I have had for a very long time and I am looking forward to the next sick day, tho She says it won’t be for another bldysixyears.

Tuesday night itself was quite vexing, though, with all the to-ing and fro-ing to the downstairs toilet to minimise any noise and disruption to anyone else.  Well I can tell you it disrupted me as I was spread right across the bed so was shoved out the way rather abruptly.  I do feel more consideration could have been taken.

Anyway.  Other than that it has been a busy week as usual with very little attention for me from my family.  Today I went to dear, dear Pippa’s house and behaved extremely well, not stealing anyone’s lunch or glaring at them when they tried to eat.  Yesterday it was the turn of dear Ebony to host me, and that too was a lovely day.  I was the model of good manners and decorum – the same can’t be said of Ebony who managed to open a kitchen cupboard that had been tied together, in order to pull out bags of cashew nuts and the like.   Clever Ebony – her intelligence is under-rated in my opinion.

Today should have been Slovenly Pizza evening, obviously, but plans do go awry sometimes, Friends.  Lad and She were at the Important Place in London so didn’t get home till mid evening.  Now, as you know if you are a Regular Reader, trips to the Important Place in London often involve an irritable march round SparksmeansMarks on the way out of the station, to buy ready meals as someone is toobldy  tired to cook a meal.  I look forward to this so much, as Lad always has Four Cheese Ravioli and I always have the plastic tray to clean out.  Imagine my dismay, then, when I heard that SparksmeansMarks by the station had sold out of Four Cheese Ravioli!  And how about poor Lad – after a long day at school followed by the ruddy Central Line in rush hour!  Oh the disappointment.  Lad had to settle for a Lasagne instead, and decided this wouldn’t be sufficient so had a large portion of creamy mash to go alongside it.  This was all rather beige, if you ask me, and some attempt at garnish wouldn’t have gone amiss, but I had two trays to clean out which was some compensation for the lack of Four Cheese Ravioli.  Lad had also popped into the shopping basket at SparksmeansMarks a bag of prawn crackers and a large bottle of Peroni.  This might seem a slightly unbalanced meal with a nod to more than one culture’s cuisine, but I can see the attraction.

On the long drive back from the station, Lad was in a perky mood and started a philosophical debate about how it has been proven that there is no philosophical justification for killing animals to eat meat, and that philosophers have been unable to come up with an argument that trounces all others.  This of course was half an hour before Lad dived into his Beef Lasagne, but that’s not the point.  Poor Lad – the only other person in the car at the time was not even slightly inclined to enter a philosophical debate about anything and was yawning throughout.  This is rude and disrespectful to Lad’s vast intellect and ability to talk at length when nobody is really listening.

Well it’s the weekend again – it comes round so quickly.  There might be a very slight lie-in tomorrow, though not much, I’m told, and doubtless I’ll be dragged out for a very long walk.  Maybe it will rain.