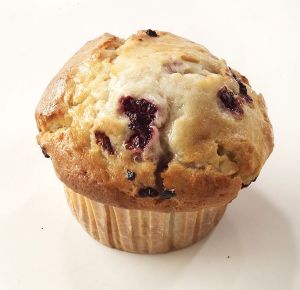 I know!  It’s yet another food one!!  The thing is, Lad had just sat down with his Saturday breakfast of a large choc chip muffin and a cup of tea, when I dashed into the lounge at lightning speed and in one smooth movement, removed the muffin from his plate and ran to the kitchen with it.  Lad barely had time to register it had disappeared!  I was very impressed with my own speed and dexterity, I have to say.  Nobody else was impressed with me though, and I was shouted at and told I am getting worse.  There was a time that I didn’t just snatch food from plates willy nilly, but I don’t remember those days and they can’t have been a lot of fun to be honest.

It was a lovely muffin.  She had only just returned from doing the food shop, or ‘popping into town’ as Regular Readers will remember it, and I suspect that this muffin had been baked freshly that morning.  Really it was a shame to eat it so quickly in two gulps as it made savouring the flavour difficult, but Readers you never know when someone might try to take your food away from you so it must be eaten fast at all costs.

It had started strangely, the weekend.  At 4.45am on Saturday morning when everyone was looking forward to a lie-in, I decided I needed a comfort break and Gingercat started yowling.  I was enjoying the night-time ambience of the garden and had to be bribed back in with a biscuit – however, I was in a funny old mood and decided that instead of eating the large bone-shaped biscuit, I would bury it somewhere safe to have it later.  Readers, I could not find anywhere to bury it – I walked round and round the bedrooms with the damn bone biscuit in my mouth, but simply couldn’t make a decision.  In the end I saw Young Lad’s nice expensive fluffy bathrobe thrown on the floor, and I thought what a marvellous place for hiding a biscuit this would be.  So at approximately 5.15am I was busy digging up the bathrobe and scrunching it into a heap, so that I could bury my bone deep inside.

By this time Gingercat was walking round the house yowling pitifully – I suspect Gingercat is well on the way to senility – and it was an awful racket.  I found it very hard to get back to sleep and I must say that She was in a foul mood in the morning, due to the number of disturbances. I felt this was rather unwarranted.

Soon it was time for my Saturday morning walk, which was rather lovely as there were many friends by the river.  Teddy the Copper Australian Labradoodle (he’s NOT a Cockapoo) was down there, and I haven’t seen him for ages so I played briefly with him.  Very briefly in fact, for I sensed that Teddy’s Pack Leader had some treats and so I jumped up at her nice black coat and put muddy footprints all over it.  My daring was rewarded with a couple of extremely small treats; I have to say I was a little underwhelmed by them.  I do hope she brings more substantial ones in future.  Then we ploughed on over the river, checking under the bridge for dead bodies like you do, and up into Top Field.  Readers, there WAS a dead body in Top Field!!  Not the sort you’re thinking of, but a rabbit with half its head chewed off.  We had to stand by it, saying Oh Poor Poor Bunny for ages, which I thought was faintly ridiculous and very dull.  You would have thought lessons had been learned twenty years ago when saying Oh Poor Poor Hedgehog whilst driving past a carcass, and smashing into a  stationary car full of firemen waiting at a junction. But clearly not.

Once we had stopped weeping over Watership Down, we carried on and eventually finished our walk.  I was exhausted for the rest of the day.

Yesterday morning it was very frosty out and the ground was frozen solid.  Young Lad’s football match was called off, and so a long, leisurely Sunday stretched out ahead of me.  But no.  I was dragged for an early walk round the Rec even though it was bone hard and freezing cold.  On the path near the Rec, though, I spotted some eggshells.  They were frozen and stuck to the ground but even so!  Now I know what you’re thinking – why on earth would there be broken eggshells on the alleyway by the Rec?  I don’t know and couldn’t care less – I simply pulled on my lead and snatched them up.  There was an added crunchiness to them, due to the ice, but I still enjoyed them.  The calcium content is very good for me, you know.

I felt very sorry for Lad and Young Lad at the weekend.  They were FORCED to engage in manual labour for an hour  – one had to do the dusting and the other had to do the hoovering.  This was  unpaid, and I feel this is very poor parenting yet again.  For the love of God, it’s their weekend too!  Then poor Young Lad had to do FOUR pieces of homework yesterday and Lad has done, er , a bit.  Too much is expected of them.

There was a programme on TV last week called Dogs Behaving Badly. You would not believe the number of you that texted/whatsappd/phoned to tell us to watch it.  Sicknote was the first, and Grandma wasn’t far behind.  Well. This programme features badly-behaved dogs who are seemingly out of control and so a very nice chap with a touch of tweed about him comes to your house and instils a little discipline into proceedings by saying “down boy” and revolutionary things like that.   She said, predictably, that the nice man with a touch of tweed would be able to do BUGGER ALL about my abysmal behaviour,  largely the raiding of cupboards and stealing of food.  I sincerely hope She doesn’t invite him round to try.

I’ve had a lovely day at Ebony’s today, and tomorrow I’m off to Pippa’s house.  What would we do without friends, Readers?