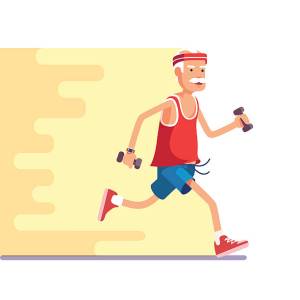 This morning, Readers, I was very alarmed by the presence of an elderly gentleman in black lycra sportswear up in Top Field.  I was having a jolly nice walk – it was a tadge chilly but dry – when all of a sudden coming towards me I saw a man wearing black leggings, a fluorescent sports jacket and a bobble hat.  Now I have a particular dislike of bobble hats and I’m not keen on fluorescent jackets, but very thin legs clad in black lycra just tipped me over the edge.  I ran up to the man and barked fiercely, to show him that I was not intimidated by his leisure wear.  He seemed hurt and disappointed, and made a curt comment to She along the lines of “oh I thought your dog looked friendly,” so She had to mumble some sort of lame apology that “he doesn’t like bobble hats.”

Friends, the point I’m making is that extremely senior people with extremely thin legs are not for whom lycra was intended.  It scared me.

Other than that it was a very pleasant walk, to the rhythm of God Rest Ye Merry Gentlemen in She’s head, so it was fairly brisk as you can imagine. The wind in Top Field was bitingly cold and made my ears flap backwards.  There were a few dogs around – I saw a large golden retriever by the river and raced over to it, thinking it was Pippa, but of course it wasn’t and I was crestfallen, but I bounced back when I ran off up to the houses at quite impressive speed and found someone had thrown bread out for the birds.  Or me.  Whoever got there first.

On the way back we bumped into Oscar the Border Terrier who, in a change from his normal routine, didn’t jump up at her jeans and plaster them in mud.  Instead Oscar ignored us and ran off, so I jumped up at his Pack Leader and plastered him in mud for a change.  It was fun.  She said to Oscar’s Pack Leader that he was walking into the very cold wind, and that coming back the other way the wind  isn’t so bad, and Oscar’s Pack Leader said he would look forward to that.  It was a very dull conversation.

Once home I settled straight down in my armchair and slept – the cold wind and three miles to God Rest Ye Merry Gentlemen had fair worn me out. There was football on the telly this afternoon so He kept me company in the cosy lounge.  It was nice.  Except that there are still no chocolates on the tree.

I’m glad I was safely indoors this afternoon as the rain has slashed down non-stop, and it is freezing.  How dreadful it would have been to be out walking this afternoon.  Or trying to do any Christmas shopping.  Or going to Tesco.  Or any of those things that other people were doing.

Even poor Young Lad was out in the atrocious weather – having arranged to go out with his friend to have some lunch and buy some presents, Young Lad got as far as his friend’s house up the road and realised he had left his money at home.  So there was a false start as Young Lad had to come back and start all over again.  He took pity on Young Lad and his friend and gave them a lift, but even so they had to walk home again later in the cold.  This seems very unfair.  As Young Lad told us several times.

What I find poor, Readers, is that there has been some crossing of fingers tonight that the awful weather may mean Young Lad’s football match tomorrow morning is called off.  “Waterlogged pitches” is the phrase I’ve heard several times,  muttered fervently and hopefully.  This is extremely selfish and shows bad parenting yet again.  A good parent would be highly excited about Young Lad’s football match regardless of the abysmal conditions and would ENJOY standing at a sodden pitch in the freezing cold for nearly two hours.  So long as they don’t even THINK of taking me along.

Yesterday was nice as I went to dear, dear Ebony’s for the day and had a wonderful time with wonderful people.  Sadly they don’t have any chocolates on their tree yet – at least I couldn’t see any – and I did check out Pippa’s tree when I was there the previous day.  They definitely didn’t have any.  I do wish everyone would hurry up and put the chocolates on.  What’s the matter with them?

Readers, I’ve had some Christmas cards sent to me!  This is very pleasing.  I don’t mean someone has just tagged me into the family Christmas cards – oh no, I’ve actually received my own!   This is what happens when you are a published author – did you know I’ve written a book?  I may have mentioned it a couple of times.  Don’t forget there are only a few postal days left before Christmas and you know how busy Amazon gets…

There has been a lot of frantic cleaning undertaken here today, and frankly it has got on my nerves. The incessant whine of the hoover, the spush spush of the Mr Sheen spray – good grief it’s annoying.  Thankfully all has quietened down this evening as She and Young Lad are under a blanket on the sofa watching Series 6 of Chicago Fire – Young Lad has a diet lemonade and Gordon has popped round as usual for She – Lad is upstairs hitting his punchbag and doing other strange fitness things, and He is sorting out paperwork.  The noise of the shuffling papers is quite annoying, actually, but I’m upside down in my chair trying to block it all out.

I haven’t stolen ANY food today.  Not one single thing.  This is not a good day in the life of a Beagle and I must try harder tomorrow.  Let’s hope the pitches aren’t waterlogged, then when they’re out at football I can have a good look through the cupboards.  Happy days.