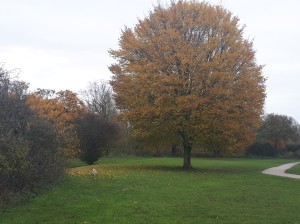 What a glorious autumnal weekend it has been here, Readers.  Yesterday’s long walk was to the rhythm of ‘Golden Brown’ by the Stranglers circa 1981 as the wondrous colours of the leaves made She think of this.  She stomped up the fields singing this in her head but didn’t appear to consider what the lyrics actually mean as I have a feeling it’s not a song about the shades of autumn.

There was a large heron at the river yesterday.  This meant we had to stand still and ooh and aah over it, as it flew off.  I found it very tedious.

Anyway, it was an extra-long walk yesterday due to the lack of exercise and fresh air during the week – I’d had plenty, obviously, but didn’t get any say in the matter.  We went over the bridge into Top Field, then up into Top Top Field, and THEN, Readers, in a very unusual throwing of caution to the wind, we went into The Field Above Top Top Field!!  Oh, it was refreshing to deviate from the humdrum route of our normal walk.  The Field Above Top Field is actually nicer than Top Top Field as it is grassy and smooth rather than full of ten foot thistles.  Really I was quite exhausted by this marathon and wanted to take a short cut home, but this wasn’t allowed and I was dragged for a full four and a half miles.

You would think any sane person would call it a day on the dog-walking front, but no – as dusk fell I was dragged out again to go round the Rec.  This time we knocked for dear, dear Ebony down the road and took her with us.  Ebony wasn’t allowed off the lead, however, in case she decided to play silly beggars and run off like she did the last time we took her out.  Poor, poor Ebony, having to trot round the Rec on her lead.  Very restrictive.

Finally I was allowed to go home and rest from this exhausting day.  I slept upside down in my chair all evening, and even when my feet and legs kept violently twitching, I failed to rouse.  In fact, when I was told to leave my chair and go out to the garden for a comfort break at bedtime, I growled and snapped at everyone.  They still made me go.

It beggars belief, Readers, that on a rare Sunday where nobody has to get up early, Young Lad’s alarm clock went off at the usual silly time.  This annoyed me intensely as I was heavily asleep on Young Lad’s bed at the time.   How hard can it be to turn your ruddy alarm clock off on a Saturday night?  I was so cross and glared at Young Lad so that he got the message.  Then, mere  minutes later as I had fallen back into a heavy sleep, the hot water system clicked on and did its occasional impression of Concorde landing – I have never heard banging and crashing like it.  Really you would think they would get a plumber out – the system clearly needs a powerflush and I’ve tried to tell them this several times.  It was a hideous racket.

Gingercat then decided to start his ridiculous yowling from the kitchen and it was just too much for a Sunday morning.  She was in such a mood after all this disturbance that a trip to Costalotta with the newspaper was needed to recharge the batteries.

It was Remembrance Sunday today and I like to show respect as much as the next man, so while we were up in Top Top Field we stood still at 11am for two minutes.  At least She stood still and was reflective, and I tried to but there was an interesting smell in the bushes which I had to investigate.

We took dear Ebony with us again this morning for a super-long walk.  Ebony is the size of a small horse and her legs are five times the length of mine, and I really do find it tricky to keep up.  Ebony had to stay on the lead again, as it was Top Field in which she played silly beggars and ran off for forty minutes last time, so I just trotted along behind, trying my hardest to keep up with what is essentially a racehorse.  Excited by our discovery yesterday of The Field Above Top Top Field, we went back up there and did a circuit.  By the time we crawled back up the road towards home, we had done another four miles and I really was beginning to feel quite faint.

Lad was encouraged to leave his bed at lunchtime with a cup of tea, but I feel this is harsh as Lad was very tired from being out with his friends the night before.  Lad was not completely grateful for the cup of tea and I can see his point, to be honest.  I’ve had a good sniff around in Lad’s room today as there is all sorts of rubbish in there and I’m fairly sure his school bag has some sandwiches from last week in it.  I’m just waiting until nobody is looking.

This afternoon has been very peaceful.  Young Lad had to do Art homework, Lad has done some work too (yes!), and She was busy doing a millionbldyjobs.  He has been out all day.  So there I was, having a wonderful sleep and enjoying the smell of lemon drizzle cake from the oven,  when I heard my lead being jangled again and off we went for the Dusk Walk with Ebony.  This time Ebony was hilariously funny as she managed to wriggle out of her halti collar AND her main collar, and ran off laughing.   It was very amusing.  She had to shout “sausage” very loudly indeed which got some strange looks from the men putting the football nets away, but eventually it had the desired effect and Ebony was re-collared.  She’s such a laugh, is Ebony.

Some of the lemon drizzle cake has been taken round to Lovelyneighbourontheright to thank them for letting me in the garden on Friday, and playing fetch with me.  They did snitch on me, telling She that I growled at them and wrinkled my nose when they tried to get me off Young Lad’s bed, but there you are.

I, of course, haven’t been given any lemon drizzle cake.  Nor was there a Sunday roast today – standards are slipping again.  Instead a curry has been made and eaten on the sofa tonight – sloppy.  But I suppose I have benefited from this as the popadums have made a mess all over the upholstery which I will clear up.

It must be bedtime soon, I’m worn out.