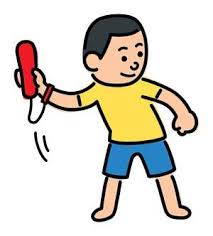 Yesterday evening, Friends, I went over to the Rec with dear, dear Ebony’s Pack Leader and the black cockapoo that I have been trying to mate recently was over there.  It turns out this cockapoo is called Zach, and I’m not sure what it is about this particular animal, but my God does Zach make me feel frisky.   I chased it around and tried to mount it from behind, the side and any which way.  I think Zach was quite enjoying this game to be fair and did his own share of climbing on top of me. This jollity carried on for quite a while until the various Pack Leaders managed to separate us.  I really don’t know what came over me but I just have these carnal urges as soon as I see Zach.

There has been some playfulness here this afternoon, too!  I know, wonders will never cease!  It being Sunday and raining, Young Lad asked if they could all play a boardgame in an attempt to look like a normal family.  Young Lad really wanted to play Monopoly, which  pleased Gingercat and I as it meant we could walk over the board and knock the houses over.  However, He said Monopoly is boring and so there was a discussion.  Readers, they decided to play on the Nintendo Wii! Talk about a blast from the past.  The Nintendo Wii is ten years old if it’s a day, and had to be dusted very carefully before they could start.  Anyway there was much hilarity and jumping up and down in the lounge, swinging a lump of plastic from side to side.  It all looked ridiculous, so I slept in my chair.  I was disappointed about the Monopoly – Gingercat and I don’t think the Nintendo Wii is as much fun for us, though Gingercat did try to swipe the cord thing hanging down from the lump of plastic. I wonder how many years it will be before the Nintendo Wii is played with again.

Yesterday was a strange old day, as Lad and She were out from dawn until nearly midnight, so I was home with Young Lad and He.  We had a nice walk in the morning and when they went out for a few hours late in the afternoon, I chucked the huge bag of conkers round the back porch and emptied the waste bin in the bedroom all over the floor.  I ate a few things from it but I won’t tell you what as it’s a bit disgusting. This was even though Ebony’s Pack Leader had told me to behave myself when she brought me back from my walk/sexual encounter over the Rec.  I simply ignored Ebony’s Pack Leader and took the opportunity to create a mess. It was fun.

So where were Lad and She, I hear you ask?  Well. Lad’s birthday treat was a visit to somewhere called Pork Tharpe, which I gather is a large amusement place with large and hideously noisy rides.  It is the sort of place that people like Lad and his friends absolutely love, and people with any sense whatsoever absolutely hate. It is a ‘total bldy rip-off’ according to She, but Lad chose this as his birthday treat. Pork Tharpe is a ruddy long way away, and to ensure that Lad and his friends were there nice and early to be first in the queue, a 6am alarm clock was called for.  This annoyed me intensely.  It was Saturday for the love of God! Nobody considers me in these things.

Anyway, you’ll be pleased to know that Lad and his friends had a simply marvellous time waiting in queues for three hours and then being flung upside down and round and round at speed for thirty seconds.  This is called fun.  She spent the day having lunch with old friends which was altogether more civilised, and a chilled glass of Pinot Blush was infinitely preferable to the KFC and carbonated crap that  Lad and his friends were ingesting.

The agreed meeting time for the end of the day at Pork Tharpe was 9pm.  At 8pm, feeling somewhat weary, Friends, She tried to enter the premises to have a good strong coffee before the long return journey.  This proved difficult.  The security guard said he couldn’t let She in as She hadn’t paid for a ticket.  She said She just wanted to grab a coffee and come out again.  The security guard (who was very good at his job) said that She might be trying to sneak onto the rides.  She said do I look like I want to go on your bldy rides and the excellent security guard said you would be surprised, people try all sorts of tricks.  She said it’s 8pm, you close soon, I don’t want to go on your sodding rides I just want a sodding coffee, and the remarkably skilled security man said he couldn’t take the risk and let her in, but there was a petrol station ten minutes away that sold coffee.  What a splendid professional he was, and really deserves some sort of award for his dedication in not letting a middle aged knackered mother on the verge of a nervous breakdown sneak onto Colossus.  Well done, security man!

Today I had a lovely long walk this morning, right up into Top Field, and we marched along to the tune of a very silly song called “Conkers” that She has heard a lot lately.  It has a brisk rhythm, and I’m jolly glad no singing out loud went on as it is ridiculously infantile and other dog-walkers would have thought there was something wrong with her.  We stopped to talk to lots of friends, but when the conversation turned (inevitably) to the unseasonably warm weather, it was boring beyond belief.

Once home it started raining (She had just put the washing out – too funny!) and it rained for the rest of the day.  At tea-time I was offered the chance of another walk over the Rec and I said yes, thinking that Zach might be there and I could do some more humping – but we only got as far as three houses down when it was deigned to be too wet and horrid, and we came home again!  How ridiculous, what a total waste of time.

Well, Readers, Sunday tea has finished and they have not given me an egg sandwich or a piece of cake.  This is very poor.  I appreciate the egg sandwiches might cause a problem from the back passage point of view, but you would think a lightly salted kettle chip or morsel of sponge could come my way.  It’s my Sunday too!

One thought on “Playful”