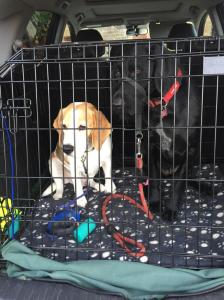 As it happens, Ebony’s Pack Leader drove us somewhere different for our lovely walk, but I wasn’t to know this  so I looked very gloomy all the way there in the car.  It was only once we were out of the car and bounding around the fields that I cheered up.

Anyway let’s go back a little.  Yesterday I had a lovely day at Ebony’s house and wasn’t taken out in the car, so it was altogether less stressful.  It was a beautifully warm day – really a touch of the Indian summer – and so I was dragged out to the river after dinner as well, because She wanted a long walk in the evening sunshine.  It doesn’t seem to matter whether I want another walk or not.  And I didn’t.  So I dilly dallied around a bit on the way down the road – there has been a piece of chewing gum stuck to the pavement for a few days, and I’ve been doing my best to pull it up.  It is intensely irritating to have a nice minty substance stuck to the pavement and not be able to eat it.  I spent a while trying, though.

Once down at the river we did see a few friends also out in the evening sunshine, so I felt a little more positive about life.  There were also quite a few teenagers down there last night and some accompanying strange smells.  I’m not commenting on their attitude to personal hygiene here, if you get my drift.  Goodness me, what is the world coming to?

On the way back we bumped into Oscar the border terrier who jumped up at her and made her legs muddy as usual. Oscar can be relied on for this.  Oscar’s Pack Leader said I am looking very slim!  And he’s not alone – I’ve had several comments like that lately.  She of course becomes all puffed up with pride as though it’s some huge personal achievement. It isn’t.  In all honesty I am half-starved most of the time.  That’s why I have to try to eat chewing gum from the pavement.  Anyway, I was jolly glad to get home and curl up in my chair for the evening.

Lad and Young Lad didn’t seem particularly keen to do any homework last night, so there was another dull discussion about Time Management.  Neither Lad nor Young Lad took any notice whatsoever and Young Lad continued watching Family Guy whilst Lad continued looking up designer clothes on his phone.  Top parenting yet again.

If you remember, it was Food Tech for Young Lad at school yesterday.  I was really despondent when I found out it was salad, as this is just a total waste of everybody’s time.  In fairness to Young Lad he made a very good job of the salad and the combination of plum tomatoes, cucumber, grated carrot, sweetcorn and cheese was surprisingly appetising. Young Lad needs to give some thought to presentation, though, as walking all the way home from school with the salad upside down in a tupperware box in one’s rucksack is not conducive to attractive layers. Stopping off at the Co-op for a bag of crisps didn’t help either.

Lad is in discussion at school about which of his A Levels to drop.  Lad says he will drop English as the books are complete crap again, just like they were for GCSE.  I doubt very much that Lad has actually looked inside any of them, so this seems harsh and “Anthony and Cleopatra” does have some decent reviews to be fair, but Lad is very wise and always right.  Poor Lad.  Fancy having to read such inane literature.

Both Lad and Young Lad have managed to miss the football trials at their respective schools. This is quite careless as many other people did know when the trials were and turned up, but for some genetic reason Lad and Young Lad failed to do this.  Thus neither of them are in any football teams which means more time on the sofa. In addition, yesterday Young Lad thought it was rugby for PE and took his football boots to school when in fact it was basketball indoors and football boots were not allowed.  Young Lad was given the job of refereeing the basketball.  Mostly this involved shouting ‘Sir!’ when boys crashed into other and were injured. I don’t think it was a very taxing job for Young Lad, though maybe more so for Sir.

It is Friday night, Readers, at the end of another bldy week, and Slovenly Pizza night is underway.  Young Lad has fallen asleep under the red fleecy blanket watching 24 Hours in A & E on catch-up and really who can blame him.  The heating is on, I’m glad to say and I feel very sorry for poor Lad who is out with his friends in a town far away.  Poor Lad. Yes it was his own choice to bugger about on trains  but even so, it will be chilly for him travelling back tonight.  You would think He or She might go to pick poor Lad up if they had any kindness about them, but He is two glasses of Shiraz down and She is about to invite Gordon round.  You see the level of selfishness with which I live in this house?

Well, Readers, the success of the conkers is overwhelming.  The spider that ran under my chair sticking two fingers up the other night is probably still there. There was a large monster on the bathroom floor the other night, and last night a medium monster was in the hall.  What an excellent idea those conkers were.

I nearly forgot Friends – Lad was on time for a hospital appointment yesterday! I know!  It is such a step forward for Lad.  This was achieved by lying to him about what time the appointment was, bringing it forward a good 40 minutes.  She was very pleased to receive an email from Lad’s tutor today with the simple heading Lad: Punctuality.  She couldn’t wait to read it.

Well I jolly well hope we all get a lie-in tomorrow as I’m fed up with that ruddy alarm clock going off at 6am.  I’ll need to pop out in the garden for a comfort break at about 5, but then I’m hoping for another few hours’ sleep.  Fingers crossed.