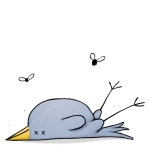 Now the funny thing is,  as I told you, I was perfectly behaved at Grandma’s house for three weeks.  I did not raid bins, empty food cupboards, steal anything, roll in fox poo or dead animals.  I did not try to bite her.

I’ve been back home for two days and normal service has been well and truly resumed.

Yesterday I went for a nice walk down to the river with She and Young Lad. I had missed my walks down there very much.  As soon as we rounded the first bend, I saw a dead bird in the bushes and raced up to it – I was on the lead but Young Lad was holding me, and he didn’t stand a chance. I yanked his shoulder out of his socket and grabbed the dead blackbird – there was a screech and an attempt to stop me but to no avail. They had no choice but to stand there and listen to me crunching through skull and wings.  I was rather annoyed when some of the intestine fell out of my mouth and dropped to the path, as I was pulled away sharply so missed out on this part.  Anyway once there was nothing left but a few feathers protruding from my lips, we went on our merry way.

Further on, I ran off to see whether anyone had put bread out for the birds.  They hadn’t, but I had a good sniff around and totally ignored all the shouting at me to come back.  I went back in my own good time.  Several times yesterday I ran off and wouldn’t come back when told to.  It was fun.  She seemed rather cross at the end of our walk and said it wasn’t a pleasant experience.

Now I know what you’re thinking, Readers – golly, Young Lad coming out for a dog walk and even holding the lead?  What with jet lag and all?  Poor Young Lad also had cricket training in the evening, and I really feel they expect too much of him.  I was pleased about cricket training, though, as I have missed the cricket club over the last three weeks, and was looking forward to walking round the ground over and over again eating bird poo.  Would you credit it – on one of our laps of the boundary, I spotted another dead bird in the bushes!  However this time I was swiftly intercepted and didn’t get to eat that one.  There was plenty of bird poo though.

Occasionally we sat in the clubhouse so that She could chat to people – I find this incredibly tedious and rather selfish, so have no choice but to look for food on the carpet.  Hurrah for a messy Pringles eater, as I sniffed out a couple of smashed golden discs under a bar stool, and made a dash for them.  I was on the lead and this time pulled her arm out of its socket, but never mind.  The Pringles were nice – sour cream and chive, I suspect.  I dived under a bench to see if there was anything else and wrapped my lead round a table, nearly dislodging someone’s glass of chilled white wine, but to be honest I was bored witless with them all asking about the Amazing Trip.  Who cares?

Readers, you might be thinking that was enough fun for one day.  Oh no.  We arrived home at 8.30pm, all a little tired, and I went out into the garden where I found a manky apple that had fallen from the tree.  I took a bite as it was quite slushy, but this was an error of judgement, as there happened to  be a wasp in the part I bit.  The bastard wasp stung me in my mouth and I screamed.  Now, it has been said before that I’m not a very brave dog, which I resent, and I did have quite a dramatic reaction to the wasp stinging me.  I went very peculiar, all floppy and unable to sit upright, and my eyes glazed over and closed in a strange way.  I looked as though I was not long for this world, and everyone fussed round me extremely worried.  Well, He was worried and sat with me, stroking my head, while She ranted on about don’tbldywellneedthis ohforgod’ssake and things like that.  She did attempt to look in my mouth, so I bit her hand really hard and drew blood.

In the end, after googling “wasp sting in dog’s mouth” and noticing that I did in fact look dead, She rang the emergency Evil Vet.  The Evil Vet said is he breathing, which I was, just, and then said well it’s £150 out of hours fee before we start, so do you want to monitor him for a bit before bringing him out?    This was agreed , and I was “monitored” for another ten minutes, until I noticed that Young Lad was eating a Muller Fruit Corner yogurt, so I sprang back to life miraculously and went to lick the pot.  After that I seemed fine.

All in all, quite a day.  And nothing like the peaceful days I spent at Grandma’s house.

Lad, during all of this, was still out with his friends.  This had begun on the Tuesday, and finally finished when he rolled home after everyone had gone to bed last night.  It is important for Lad to have fun, Readers, especially as he has been stuck with his family twenty-four hours a day for the last three weeks.

Today started in an unusual yet wonderful way.  There I was, sound asleep on the bed at 6.30am having had my comfort break and breakfast, when I was told I was going out for a walk.  What, this early?  We never go out at this time!  What the heck, I’m trying to sleep!  But it appears that jet lag means you wake up at silly hours and so it was deemed important to seize the day and take me out.  Well.  What a good decision that turned out to be!

Firslty, I found part of the wing that I hadn’t finished off from the bird yesterday.  Excellent.  Then I bumped into a cockapoo who lives down the road, and for some bizarre reason I felt as randy as anything and tried to mount it.  She kept shouting at me to stop because I don’t know what it’s all about, but it was a lot of fun.  I chased the cockapoo all over the shop and kept trying my luck.  Eventually I was put back on the lead.

Who did I bump into next?  Why, dear, dear Ebony!  Oh we were thrilled to see each other – it’s been so long!  Poor, poor Ebony has been dumped in kennels while her family went on holiday, and I of course had been dumped at Grandma’s, so we had a lot to tell each other.

Further down the path was a lady who stood still, and she didn’t have a dog with her.  Clearly there was no reason for her to be by the river this morning, so I barked ferociously at her.  The lady said don’t be so silly, I used to have a Beagle, so of course then there was a long, dull discussion about how awful Beagles are plus unashamed advertising of my book. Dreary.

After ‘power walking’ round Far Field (I struggled to keep up), we headed back and just guess who was running towards me?  It was dear, dear Pippa!  Oh we chased each other and she jumped on me, over me, at me and had such a lovely time.  I’ve missed Pippa such a lot, just like Ebony.  What a wonderful morning.

So I was back home by 8am today, having walked two and a half miles, and by golly I’m pretty tired.  It’s now raining so hopefully I won’t be dragged out again today.

Young Lad has now gone out with a friend to the cinema, and Lad has just woken up, aided by the smell of warm croissant and a cup of tea under his nose.  I don’t get this treatment.  He has been given a list of jobs to do, including put the ruddysuitcases in the roof, but has said there is a party he wants to go to tonight.  The discussion continues.