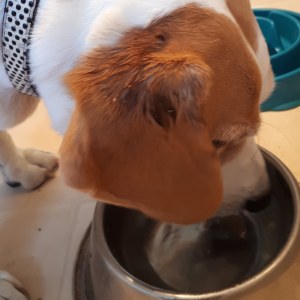 I HAVE GREAT NEWS!!!   Yes, the secret is no longer.  My book is now available to buy on Amazon!  This is absolutely incredible, as I just don’t know where I find the time to do these things, but there you go.  Any of you Readers who haven’t been with me since the start of my blog, you need to buy the book and then a lot of things might make sense.  They might not, but you never know.

Well, who would have thought it?  I amaze myself at times. And you would not believe the number of messages I’ve had tonight, requesting a personally signed copy.  I’m thinking how best to do this, and wonder if a splodge of fox poo will do the trick.  What do you think?  I would suggest you buy the book first (it’s free delivery over £10, so buy two) and we’ll worry about the signing later.  I can see a personal signing session at the local library might be in order.  Now, before any of you cynics think this is a money-making exercise, She wants to point out that most of the pitiful profit after printing costs is going to The Important Place in London, where Lad and Young Lad seem to be such regular visitors.

I’m actually rather annoyed about this, Readers, as if I’d been consulted on this, I would have preferred a more relevant charity such as Beagle Rescue, Misunderstood Dogs, or the such like.   However I wasn’t consulted and She said “I’ve sweated bldy blood and tears over this, I’ll decide where the bldy money goes” and lots of positive things like that.

So this is what has been going on with all those visits to our friend Batch.  Luckily Batch has technical skills that far surpass hers (it’s not difficult) and has managed to do Important Things like Formatting etc.  It sounds very, very dull.  I do feel that Colleagues 1 & 2 are owed an apology, as if She’s taken her eye off her work in the same way that the house and family have been neglected, they must be quite irritated.  Anyway,  hoo bldy ray, the book is finished.

Let’s move on to other things.  Yesterday was ridiculously hot yet again and I wasn’t allowed to go to Young Lad’s early morning cricket match, as it meant travelling in the car.  This suited me just fine and I slept quite happily in my chair all morning.  Then they came back and had lunch, so I whinged a lot until someone gave me a few titbits, and then I thought I’d escalate this somewhat by barking for my 4pm dinner at 1.30pm.  They caved in at 2pm.  Excellent.  After that, quite unbelievably, it was cricket match no.2 so I was dragged for a walk to the cricket ground where He was playing.  For goodness’ sake, it was 30 degrees and neither Young Lad  nor I wanted to go but nobody listens.

To be fair, once at the cricket ground I did have quite a nice time cleaning up their barbecue – quite a lot of meat juice/oil had dripped down to the bottom of the legs, and I felt this was sloppy of them so I cleaned it up.  Unfortunately I misjudged where the grease was and got quite a lot on my ear, as you can see in the diagram above.  This annoyed me, as I could smell meaty grease but couldn’t get at it. You’ve no idea how frustrating this was.

Then I spent a pleasant half hour crawling under the picnic benches and chairs, to hoover up whatever little nuggets of food had been dropped the previous day. I did quite well; crisps, bread and some biscuits.  Then, on the walk home I was thrilled to find that some careless child had dropped a few pink chewy sweets near the Rec; I belted towards them and grabbed two, before being yanked back on the lead.  They stuck to my teeth but were most agreeable.  This is what I love about the summer – there is always so much food everywhere.  I wasn’t taken down to the river last night due to this very fact, as it was decided there would have been a lot of bldy barbecues and picnics, and I would spend the whole evening running off and stuffing myself.  What a nice attitude.

Luckily, Friends,  dear, dear Pippa came to collect me really early this morning for a marvellous day of daycare at her house.  It was nice and cool that early, so we had a lovely walk down at the river, although Pippa’s Pack Leader had to let us off the lead as soon as possible, as Pippa was quite bouncy and holding two of us was tricky.  I, of course, was impeccably behaved.

Do you know, people are funny things.  Whilst my own family do lack many elements of kindness and appreciation when it comes to me, I can’t believe how much public spirit there has been regarding the Man in the Tent Under the Willow Tree.  As you know, Readers, I haven’t seen him for a while, and I simply won’t accept that this is because I try to cock my leg on his ropes.  We have been very concerned about his welfare, and it seems we’re not alone.  His tent is now flat on the ground, and several people are keeping an eye on the situation.   Some people are very caring.  Just not my family.

I am really looking forward to tomorrow, Friends, as Lad is coming home from his trip away to a hot country with his friends.  I haven’t seen Lad for nearly a week and have missed him very much.  Lad understands me much better than anyone else.  I expect Lad will spend a lot of time with me as soon as he comes in, before he heads straight to the Xbox.  Possibly a couple of minutes!

Golly it’s hot again tonight.  Young Lad has fallen asleep on the sofa, exhausted from walking all the way to a friend’s house after school for a haircut.  He has just finished watching a documentary about Hitler, and is now watching Eastenders.  He has interesting taste in TV programmes.  I’m heading out to the bird table, to see if the Stupid Starlings have knocked off any of the stale lemon drizzle cake.

Buy the book.  Go on.  It’s for a good cause, and you know you’ll enjoy it. Oh yes, I suppose it might help if you know what it’s called.  Boredbeagle: My Winter of Discontent.  Look it up on Amazon.