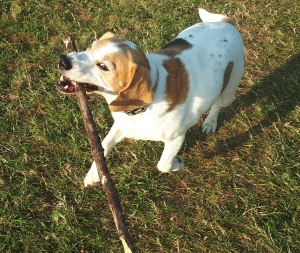 This evening I played very light-heartedly with a stick by the river.  This is extremely unlike me, and my friend Lexie would have been incredibly jealous of the huge stick that I found.  Just look at it!  If you look carefully you will also see my sharp incisors and a slightly wild gleam in my eyes, but this really is my playful expression.  So unusual was this, that She insisted on taking photos of me which I found incredibly annoying.  I had no choice, Readers, but to whack her round the back of the legs with my stick – not once, but three times, as I ran past.  This has caused red marks on the back of her legs but it did stop her taking photos.

Something cropped up in conversation at the river, which is troubling me a little.  We met a long-legged Staffie called Lucifer, and the little devil chased me all over the field, through the storm tunnel and back round the field again.  In truth this was playful chasing and I was still feeling light-hearted so joined in; however, Lucifer didn’t realise that I was in charge of the game and so when I was ready to stop I had to clout him round the ear to get the message across.  But I digress.  Lucifer’s Pack Leader was talking about what people call their dogs, and explained that Lucifer has a friend at dog training called Jeremy.  It is a Beagle.  No, I didn’t understand what was so funny about this either, but She was snorting away. Jeremy Beagle.  Only the other day we met a Beagle called ‘Mischief’ at the river.  Her Pack Leader named her this so that she could say “Mischief by name, Mischief by nature,” at regular intervals.

This reminded me, Readers, of my friend Sicknote who has recently acquired a puppy which they named Delilah; purely so that when the poor mite has an accident they can all sing “why, why, why Delilah?”

It seems to me that people don’t take the naming of their dogs very seriously, and these flippant ideas may cause real psychological damage.  Dogs are sensitive creatures and we’re not as stupid as we look.

Thankfully yesterday I spent time with sensible people, as I was packed off to Ebony’s for the second day running.  Most of the day I was asleep in her bed, and as it was warm again I tended to lie upside down letting it all hang out, so that the nether regions could have a good airing.  This was most comfortable.  We did have some jolly good walks, but other than that and eating a lot of birdseed it was a peaceful day. I like it at Ebony’s house.  He and Young Lad came home from school at a reasonable time so I had a little company for a while, but then they went out again to a barbecue at the cricket club, and failed to invite me along.  This was hurtful.  I’ve no idea why they didn’t take me.

Lad of course is still away with his friends somewhere hot, and having a marvellous time.  They’ve had a little trouble getting into a nightclub/casino but are nothing if not determined, and are going to try and convince people they’re older than they are again tonight.

She was extremely late home from work last night as it’s the ‘mental’ time of year.  I feel this was selfish, and I have received very little attention from her lately.  I made a huge fuss of her as She came in from work, jumping up and putting my paws round her neck, but of course the priority was shower, pyjamas and the sofa.  To be fair, I did lie on her lap on the sofa and we had a nice cuddle until Gingercat tried to join us.

Today there was an early visit to Tesco as there was NOTHING to eat in this house last night, and for once Young Lad had a fair point.  The fridge was empty bar some out-of-date soured cream and chive dip, a sliver of cheese and an open bottle of Pinot Blush.  None of these appealed to Young Lad, and yet again this shows neglect.  So Tesco was breached good and early, though just by chance there is one that has a branch of Costalotta in it, so the actual shopping didn’t start straight away.  We all fell on the shopping bags hungrily when She returned, especially Gingercat whose food actually ran out last night.  Poor Gingercat.

Then, Readers, poor Young Lad was made to sit nicely at the table yet again and write thank-you letters for all the birthday money he was sent.  This archaic and rather dull tradition still goes on in this household.  I feel for Young Lad, I really do.  At least this time He was in charge of this activity and so there will have been far less quality control and less need for Young Lad to bldy well start again and bldy well put  more effort in.

While all this was going on She went to visit our good friend Batch.  Now, I’m not allowed to say too much about this, but it involved staring at a laptop for two hours and saying “is that two spaces or one?” quite a lot.  It sounds dull beyond belief.  Thankfully, Batch was released from this torture when Baby Batch woke up from his nap and demanded a banana.  This signalled the end of the dreary staring- at- the- laptop session.

She spent the afternoon at home bdly well tidying up this bldy house, which in reality means moving a pile of paperwork from the kitchen to the study and having a look through Facebook for half an hour.

Tonight, Friends, I have been given an extra long walk as there is a need for More Exercise (the bathroom scales have been out again.)  We managed nearly four miles even though it was still quite warm when we set off, but Fitbit is as Fitbit does, so we marched on regardless of the temperature.  After running around with my tail between my legs being chased by Lucifer (now I never thought I’d be saying that), I needed to cool off in the river. 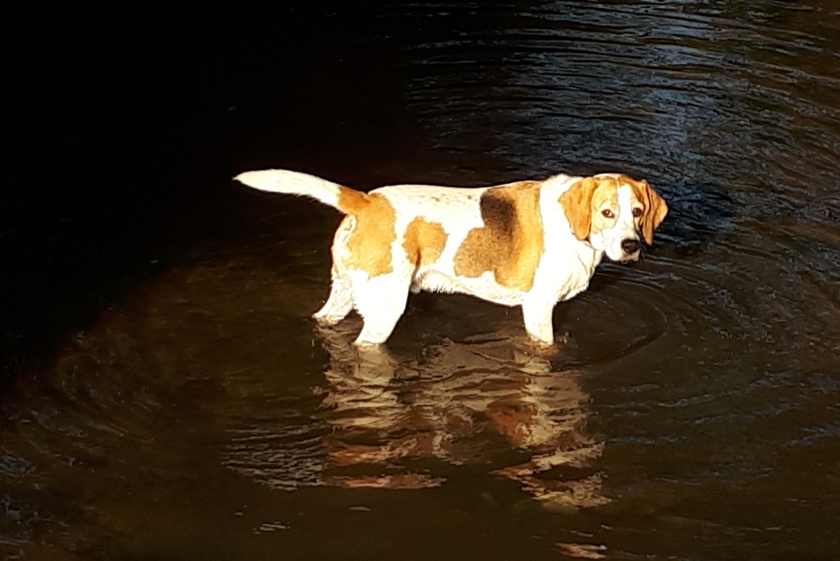 You can see how happy this made me.