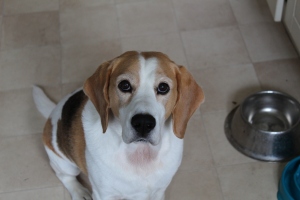 Yes, I did empty the revoltingly full bathroom bin round the landing and Lad’s bedroom.  Yes it was spectacularly over-full after Lad’s three fellow Lad friends had slept here for the night, but what of it?  I was bored, for the forty minutes I  had no company this weekend, and had no choice but to throw tissues, toothpaste tubes, cotton buds, sweet wrappers and toilet roll cardboard tubes all over the shop.  It was a shocking mess, I’ll grant you, but it was fun.  If I hadn’t been left on my own, while they went into town to buy Fathers’ Day cards etc, the problem wouldn’t have arisen. So I can hardly be held accountable.

Anyway, I had a marvellous time with Lad and his friends, who against all expectations managed to navigate the late night trains and find their way back from the end-of-exams party in one piece.  As predicted, they all slept in the lounge on an array of mattresses and the sofa, and there was a huge pile of snacks on the table.  It smelled marvellous.  Unfortunately I wasn’t allowed to sleep with them, as I would have whined to go out for a comfort break at 6am and they might only just have fallen asleep, so this would have been unfair.  However, when there was still no sign of life from the lounge at ten o’clock the next morning, She sniggered that it was time to “send in the dog”, so the door was opened for me to run in and climb all over the sleeping bodies.  They enjoyed this.  So did I, as there was a plethora of Pringles crumbs and chocolate in between the beds.  I hoovered it all up.  Now, the plan had been for Lad and his friends to go up to London, in order to buy lots of lovely designer clothes to wear now that school has finished until September.  However, Lad and his friends were still lounging on their beds  at lunchtime, happily playing on the Xbox and eating a cooked breakfast, and so it was decided that nobody could be bothered to go shopping.  I would have liked the cooked breakfast but nobody offered me any; though to be fair, I did end up with a miniscule piece of over-cooked bacon that had dried up.  It wasn’t great.

I was sad when Lad’s friends finally headed off to the station, as I had enjoyed their company.  This was partly why I had to pull everything out of Young Lad’s school bag, and trash the bathroom bin, while She, Lad and Young Lad had gone to the Card Factory.  Young Lad’s school bag didn’t have any food in, which was disappointing, but I chucked his maths equipment and Science book round the study anyway.  It was something to do.

Then I had a marvellous walk at the river, in the afternoon. Many, many of my friends were down there,  including Rocco the oh so inspirational three-legged dog.  Now, Friends, there was a rather unfortunate moment for Rocco, as he was accompanied by some children who were on scooters.  Unfortunately, one of the children mis-timed their stopping ability on the scooter, and crashed into Rocco.  As Rocco only has three legs, it’s hard to balance at the best of times, and once a scooter and child collides with you, it’s nigh on impossible.    Rocco was a very good sport, though, and rolled around on the ground quite happily for a while.  He truly is inspirational.  We went over the bridge and into Top Field, which made a pleasant change as we haven’t been up there for a while, due to the people in their white  caravans and transits, who appear to be having a nice camping holiday.    We walked to the top of Top Field, but once we realised they were still having their camping holiday, we very swiftly turned round and came back down.

Today has been busy.  Poor He had to go into work at silly o’clock again this morning, and I feel very sorry for He.  Especially as it was Father’s Day.  The good thing was that he returned mid-morning, and a Family Brunch of bacon rolls was had, with everyone sitting down in a civilised way with mugs of tea.  She didn’t have a bacon roll, of course, due to the calories factor, but joined in with the mugs of tea.  I could have had her share of the bacon rolls, but nobody offered me one. They smelled divine.  Then He went off to play cricket and Young Lad was told to get on with his homework.  Young Lad needed this repeated several times over the next half hour, and I felt very sorry for him because he misunderstood the instruction.  Young Lad thought “get on with yourbldy homework” actually meant, “just write down the list of homework, then faff around on your phone for the rest of the morning.”    Poor Young Lad.  This was an easy mistake.  Anyway, after much shouting and general tension, Young Lad understood that he actually had to do his homework, rather than writing down what the tasks were.  Readers, I felt even more sorry for Young Lad when he was told that his Maths work on Volume was DISGUSTINGLY  scruffy, and he was not bldy well handing that in, the shame of it.  Poor Young Lad had to write it out again.  Young Lad was close to tears, and so was I to be honest.

This afternoon things looked up a little, as She, Lad and Young Lad took me down to the cricket club to watch He playing.  Now this was unprecendented, as Lad hasn’t set foot in the cricket club for quite a long time now, and She was fully prepared for a battle over this.  But no!  Lad quite understood that it was Fathers’ Day and he WOULD be coming down to the bldy cricket club to watch his Father play cricket for an hour.  This was marvellous, Friends, as Lad and I rolled around on the grass together and had some special bonding time.  I think Lad forgot to watch the cricket, but that’s because he was so busy playing with me.  It was lovely.  Young Lad forgot to watch his Father playing cricket, too, as Young Lad was busy practising in the nets with his friends.  Still, it’s the thought that counts.

Tonight there has been a lot of baking as Young Lad has a cricket match tomorrow night, and it’s our turn to make the cakes.  However, as usual there was an appalling error of judgement and not enough cake mixture was made for 30 cakes.  This wasn’t helped by Lad constantly trying to eat it.  Some mild swearing was heard, once the penny dropped there were only 20 cakes made and this is not the same as the total of two cricket teams plus the coaches, plus Lad and Young Lad who will want one.  So the mixer had to be plugged in again.  Readers, this is shoddy organisation and it really isn’t that hard to calculate 11 plus 11 plus a few more.

Rumour has it that I might be receiving some visitors tomorrow!!  Lad has been paid to cut the grass, do the hoovering and empty the airing cupboard.  This is partly because She is busy working on a Secret Project at the moment, and partly because Lad’s recent clever money-making scheme actually lost money last week, and he’s skint.  Visitors!!! How exciting, I can’t wait.  Plus a cricket match in the evening, which means eating bird poo round the boundary.  Happy days, Friends, Happy days.