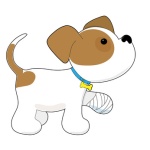 Evening, Readers, well what a day!  I don’t know where to start, so will be conventional and start at the beginning. This morning I was unusually well-behaved while everyone was out on the school run, and merely opened the food cupboard for a look round.  All the food has now been relocated to a high cupboard, and there are now three hundred bldy annoying tupperware pots on the shelves that I can reach.  Plus, strangely, an extra fifty tupperware lids.  Why is that?  Does anyone else have a surfeit of plastic lids without the pots?  Anyway, I digress.  I was annoyed that the food has been moved, so knocked a pot or two onto the floor and went back to the sofa.

The reason I didn’t spend long trashing the house today, was that my paw hurt.  I did tell you, Readers, that I’ve been limping for a few days but nobody has taken any notice, as they were too worried about a big bill from the Evil Vet’s. There was even some muttering about rubbing in some Deep Heat, but I don’t think this would have done my sensitive skin much good.  However, nearly a week of saying, “oh, it’ll probably sort itself out,” is simply unacceptable, so on our morning walk I limped very badly, to make a point.  I had to virtually scrape my ear along the path to be taken seriously, but luckily lots of other people pointed out that I was limping.  Ebony’s Pack Leader yesterday, when I was there for daycare, was most concerned about me, but of course my own family aren’t.  Finally, She felt obliged to Do Something About It, and booked an appointment at the Evil Vet’s.  (Though it was nearly cancelled when a nice man by the river suggested giving me cod liver oil, as this is a lot bldy cheaper and I would like it as it is edible.)  But no, to the Evil Vet’s we went – of course, here I stress that they are in fact a Lovely Vet’s, with Lovely Staff, and Lovely Reasonable Bills – but to me they’re still Evil.  Now I don’t like going there, as my Regular Readers know, as generally someone squeezes my anal glands – wouldn’t you protest? – or pokes things down my ears.  Today was just as terrifying.  First I had to walk up and down the path, so I could be Observed.  Then I was weighed.  Undignified.  And then, of course, I was Examined to see Where The Problem Was.  For this I had to be muzzled, as I wanted to rip the Vet’s hand off.  Oh Readers, poor poor me.  I know what you’re thinking.  Dislocated elbow?  Broken ankle? Frozen shoulder?  Oh no. no, no. It’s awful, Friends.

Stop it.  I can hear you, you know.  Anyway, the treatment for this is some darn good painkillers and, this beggars belief, nail varnish.  Yes, my toenail has to be painted with clear nail varnish to stop it splitting any further.  She tried to do this when we got home, but frankly it looks completely ridiculous, painting one’s dog’ toenails.  I told her what I thought of this, so will have to be muzzled next time She tries.  If my toenail splits any more, the Evil Vet will  have to remove it completely which I will not  be happy about.  Nail varnish, for the love of God.

After the Evil Vet’s, we popped into a well-known discount shopping village, and I rather enjoyed this.  Now, I’m never taken anywhere like this normally, so headed straight for Burger King as I sensed there might be a chip or two outside.  It was decided a coffee was needed, so we headed into Barstucks – but guess what!  They no longer let dogs in!  Well, I was taken aback to get all the way to the ordering point, and hear the words, “dogs aren’t allowed in store any more.”  The rudeness.  To be fair, the barista did then make a fuss of me and tell me I am beautiful, but the damage had been done.  So we took our small coffee and flounced out, to sit outside in the sunshine.  Humph.  But THEN, Readers, things really improved!!  We popped into Mountain Warehouse, which goes so far as to have a sign on the door saying DOGS WELCOME.  Oh yes they really are!  I was fussed over, and oohed and aahed over, and given a biscuit!  Then there was a long conversation with the nice sales lady about all the dogs that visit her shop, and all their photos up on the wall behind the till!  What a stark contrast to the “Sod off” policy of Barstucks.  Oh it was lovely, and the nice sales lady insisted on taking my photo to add to the wall. Unfortunately I wouldn’t look at the camera, so the first photo attempt had a blue Adidas trainer in it, positioned under my chin to lift it up, but looked remarkably as though someone was kicking me.  So we tried again.  I’m really chuffed about this, and look forward to seeing my photo on the wall.  This nice sales lady is actually a very clever sales lady, as we left the store with a pair of leggings and two t-shirts that we had no intention of buying before we went in.  So think on, Mountain Warehouse management!

But still the excitement of the morning wasn’t over.  Next up was a stop at PetsRVetsRToysRUs or whatever it’s called, to buy a chewy shoe as a present for Ebony, to apologise for me being so horrid to her yesterday.   I was very grumpy because my toenail hurt, and every time dear, dear Ebony wanted to play I told her where to go.  So I will have to apologise when I go there tomorrow.  And give her a chewy shoe.

See what I mean?  What a morning.  All this by 12 noon.  I’ve slept heavily all afternoon.

In other news, Young Lad completely forgot about after-school cricket tonight, and didn’t take his kit with him.  This meant She had to dash back across town with it and drop it in to school for him.  There was a lot of moaning about this, but frankly it’s just down to Poor Planning as usual.   A lot of bldy cleaning and bldy lawn-mowing has been done here today, as it has finally stopped raining, and I’ve been rather irritated by the racket of the lawn mower and hoover.  I’ve been trying to sleep, for goodness’ sake!  It does annoy me.  There has even been time to whip out the 1001 Carpet Stain remover spray, and attempt to do something about the dodgy looking stains on the carpets.  These have nothing to do with me.  Lad has only just got home from school, as everyone forgot he has his Tutor after school on a Thursday and nobody offered to go and collect him.  As a result, poor Lad has been out the house for nearly twelve hours today.  But I’m confident he’s enjoyed every minute of it.

Further afield, Nana aged 87 has made it out of the house for a fun trip to the doctor’s surgery, and is going out socialising tomorrow.  I think Nana aged 87 has been spurred on by our thoughtful text message at the weekend telling her an 87 year old was running the London Marathon. Book club at the library is easy in comparison.  Dear, dear Pippa’s Grandma is recovering from being given a new knee, and I know she loves my blog so I wish her a speedy recovery.  I hope I don’t have to have a new toenail.  That sounds just as serious as a new knee or new hip.

Wow, those painkillers are good.  They’ve knocked me out. He, Lad and Young Lad are cuddled up on the sofa with me to watch yet another football match, so yet again She will be Billy No Mates in the other room, watching some dreary medical drama.

I’ll let you know how we get on with the nail varnish.