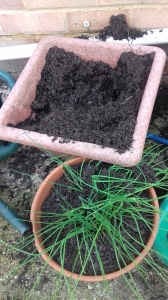 If you remember, Readers, the other evening I sat in the garden for quite a long time, gnawing on an old bone. They all thought I’d dug it up from the flower beds (I use the term loosely), but no!  In actual fact, the old bone was in the bottom of the tub in which She had painstakingly planted carrot seeds last week.  Attracted by the freshly dug earth, I had a good dig down to the bottom, and sure enough there was my old bone.  I thought I’d left one in that tub!  So I chucked the soil all over the place until I could retrieve the bone.  In the diagram you can see the feeble attempts at gardening at my house – a pot of chives, and a tub that wasn’t  big enough to grow carrots in anyway.  So really, I’ve done them a favour by  digging up the carrot seeds, as a much bigger container is needed in all honesty.  Of course this wasn’t appreciated at all, and I was shouted at for leaving soil all over the place and ruining the carrot planting.  This has now been added to the bldylistofjobs for the weekend, with grumbling that re-carrot seed planting wasn’t on the original agenda.

Yesterday was a good day, Friends, as I was at Ebony’s house for the second day running.  I sprinted down the road at 7.30am, whilst Lad and Young Lad were told to get in the ruddy car and bldyhurryup – I was so glad to get into the calm sanctity of Ebony’s house;  I didn’t look back at Pack Leader, but ran straight to the kitchen.  It was marvellous.  The weather was unseasonably hot, and in fact was the hottest April day for forty years or some dull fact like that, so I spent most of it stretched out in Ebony’s garden, on a cushion of course.  I like to think they’ve learned their lesson about expecting me to lie on the hard ground.  It was an exhausting but very pleasant day I must say. Ebony’s Pack Leader took pity on me in the afternoon and gave me some of Ebony’s food, which was a good job really as I had asked for my breakfast at 4.30am and He had been silly enough to give it to me.  I was taken home just before Young Lad and She returned from work/school, and this gave me just enough time to run straight up to the bathroom and empty the bin.  It was a lovely evening, but I really didn’t need another walk, and wasn’t best pleased at being dragged round the rec.  However, there were lots of dodgy looking teenagers hanging out in groups over there, which is a bit intimidating, so we cut short the evening walk as the ambience wasn’t quite right.

It was another early start this morning, with the 6 o’clock alarm.  I was left with my Kong, in which some old hummus had been stuffed (no, it’s not the first time, Regular Readers, is it?) and two small crusty bits from Young Lad’s toast.  This was all mashed and rammed down as hard as possible, in the hope that it would take me ages to get it all out.  It didn’t.  I had pretty much finished by the time the car left the drive.  So while I waited for Pippa’s Pack Leader to collect me, I opened the food cupboard and had a good look, but was irritated to find that the pasta had all been pushed to the back of the tins shelf and I couldn’t reach it.  You know how much I enjoy throwing macaroni round the lounge carpet.  I did think about pulling the tins off again, but was interrupted by the arrival of Pippa’s Pack Leader.  I then had a lovely day at dear, dear Pippa’s house but spent most of it asleep in awkward angles on the soft furnishings. 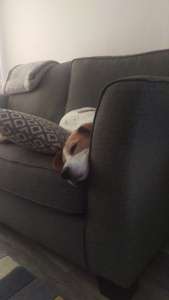 This diagram shows how incredibly flexible my neck and spine are, and yes, I was quite comfortable thank you.  I know it looks weird. 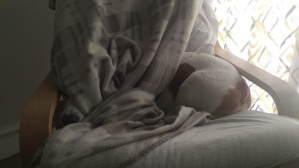 Then I decided to hide from Pippa, and as you can see, found a very clever hiding place, by disguising myself as the throw on the rocking chair.

Readers, today at work She had a conversation with another colleague, who is thinking of getting a dog.  Do you know what She said?  “Don’t get a beagle.”  The rudeness of this.  How hurtful!  Yes, we know Beagles can be a little challenging and stubborn, and somewhat food-obsessed, but that is part of our charm.  This colleague then said she quite liked my close relative – the Bassett Hound!  Seriously, don’t make me laugh.  They are slow, fat and can’t chase after anything, open cupboards, eat 10 inch triple layer chocolate birthday cakes, etc etc.  There is no contest.  Sicknote had a Bassett Hound and said it was like taking a brick for a walk. Admittedly I’m making some really bad smells tonight, and not doing a lot for the reputation of my breed, but that can’t be helped.

It’s Friday night at bldy last, someone is saying, and the Slovenly Pizza evening is underway.  I whined a lot which resulted in some carrot ends and two little pieces of crust, but when Young Lad dropped a cherry tomato on the floor, I wasn’t impressed. Tasteless cheap rubbish. Young Lad is glad it’s the weekend and says he hasn’t got much homework, probably one piece.  This is unlikely, and once he can be bothered to load up ShowMyBldyHomework on the laptop,  will probably find he has six pieces that need to be in on Monday.   She will be very pleased about this, as supervising Young Lad doing his homework is A Lot Of Fun and a Special Treat at the weekends.  Lad was late home from school tonight due to a detention – to be fair, this was a historic detention for crimes committed before Easter.  A lot of them. Poor Lad.  Lad is now happily shouting on the Xbox and it sounds like a very pleasant game that he’s playing.  Poor He has to get up early again tomorrow for work – I hope He does this quietly – so has just opened a nice bottle of red to celebrate. Gordon is in the fridge and I’m wondering what my Friday night treat is.  I think we all know there won’t be one.

Do you know, Readers, while I’ve been writing my blog tonight there has been an advert on TV starring a Beagle, and one featuring a Bassett!  What are the chances of that!  Of course the Beagle advert was much funnier and more interesting. Award-winning, I would say.

Golly I really have cracked a couple of shockers tonight, even if I say so myself. One was quite loud too.  Time for the Yankee Candles.