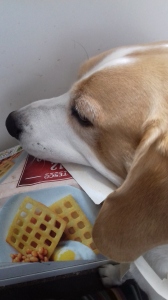 In this diagram, Readers, you can clearly see me helping out with the recycling.  What I do, is take the potato waffle box down the garden and rip it into tiny pieces, which blow all over the place.  This makes it easier to fill the recycling bags as you can fit more in if the box is ripped into millions of pieces rather than whole and bulky, and is therefore More Economical on Recycling Bags.  Do I get any thanks for this?  Of course not.  Plus there is the Exercise Quotient involved in going round the garden picking up all the pieces.  I really don’t know why I bother to help.

Yesterday was a funny old day with a lot of to-ing and fro-ing.  Well, Lad and I stayed put most of the day, with him seated at the table doing bldyrevision, and me curled up in my chair having a kip.  Young Lad had been promised a Day Out with his Friends, so was taken to the cinema followed by Pizza Express.  I would have liked Pizza Express.  You can smell the garlic from the car park.  So She was in and out all day giving lifts  to and collecting people, but I was taken out for a good walk in between all this.  We had a cracking walk at the river, where I very nearly caught my own dinner!  I told you that the fields have flooded – well, this seems to have confused the local ducks, who have taken to sitting in the water in the middle of the field, instead of on the river.  They didn’t notice me creep up, then break into a sprint towards them – I tell you, one only missed  my open mouth by a hair’s breadth!  That was definitely the closest I’ve come to catching something.   I was  very proud of myself, and there was no need to shout at me in that fishwife manner. We marched on into Far Field – I actually wanted to go to Top Field  yesterday, and stood on the bridge defiantly, but was ignored.  It was a relatively nice walk, and at nearly two miles was ample.  There was no need for the further one mile power walk round the rec as well.  I will be fading away to nothing soon.

It was quite a peaceful evening last night – as Lad had managed five hours of revision during the day, he let his hair down on the Xbox all evening.  Young Lad complained there was  nothing to watch on TV, and there was a lot of channel hopping, which I find irritating.  They eventually settled on the X Files, which was ridiculous.  He and I both found this dreadful, and fell asleep.

This morning, She left early to go and meet her good friend Chelseagirl for “brunch.”  This, apparently, is a combination of breakfast and lunch and takes place mid-morning.  Good grief.  I had to hear all about the wonderful ‘brunch’ that was eaten – ooh, a plate of smoked salmon, scrambled eggs, artisan toast…..Eggs Benedict…..”  Readers, I would have enjoyed this too, and really didn’t need to hear about it.  To be honest, it’s a bit insensitive when all I’ve had is a scoop of low fat kibble.  He stayed home from work for some of the morning, to look after Young Lad and enable her to meet Chelseagirl.  From what I gather, they spent most of the time when they weren’t stuffing their mouths with brunch, comparing stories of teenagers, family life and pets.  Chelseagirl has a similar version of Lad.  You wouldn’t think there could be two, really, would you.  There was a lot of tutting and shaking of heads, and Chelseagirl said wise things like The World’sgonemad.  They also did a lot of remembering backintheday.  It sounds like they had a blast. Luckily, He, Lad and Young Lad had a peaceful morning here with me, and no such analysis of Life In Today’s Society was carried out.  Lad was too busy with his headphones on revising, Young Lad was on the Xbox, and He did the ironing and read the paper.

This diagram shows her brunch.

This diagram shows my brunch. Which would you prefer, Readers?  Exactly.

Anyway, I was eventually taken out for a good walk this afternoon.  It was sunny when we left home, if a tadge windy, but This Is April, Friends, and within seconds the sun disappears and one is caught in a downpour.  This happened several times, and I was drenched.  Things looked up when I bumped into dear Teddy, though he and I became very bored when both Pack Leaders stood chatting for ages about somewhere called Barcelona. It was dreary beyond belief, and I had no choice but to start begging for treats from Teddy’s Pack Leader.  I stood and stared at her pocket for ages and stamped my feet, then jumped up at her, plastering her nice jacket with mud.  Eventually I was noticed, and was given a treat.   Coming back up the hill, I saw dear, dear Ebony’s Pack Leader by her car and rushed to give her a welcome.  I miss going to see them, during the school holidays, and was keen to go in their house, but was pulled away irritably.  I decided to get my own back, by biding my time carefully once we were home, then curling up on the red fleece on the sofa, when She wasn’t looking.  Don’t forget, Readers, that I had been soaked on our walk, and I’ve told you before what Wet Dog smells like.  So now the fleece, sofa and lounge smell of Wet Dog.   Should have let me go in to see Ebony!

There is Nothing Planned for Tomorrow, Readers.  This is unusual, in this house, and smacks of inefficiency.  Young Lad will be extremely bored once his time on the Xbox is up in the morning, as there is NOTHING TO DO in our house.  The four hundred books and room full of board games/toys are lame, apparently.  There is NOTHING TO DO and NOTHING TO EAT in our house. I can only hope Young Lad goes to hang out with his friends at Dreggs or somewhere similar.  Poor Young Lad.  Neither he nor Lad have bothered to get dressed today.  Slovenly, isn’t it.

Bangers and mash for tea tonight, Friends, and apple crumble.  Though not for everyone, as that brunch was very filling!!  Mine wasn’t.